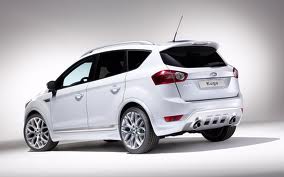 If you've ever found yourself carrying a load of groceries in the rain and cursed under your breath while fumbling for the key fob to open your car's liftgate, we have great news: the 2013 Ford Escape will let you open that gate with a simple gesture, meaning that your keys can stay in your pocket or bag.

Once upon a time, being able to open a car door from a distance felt like a truly amazing thing. But as fantastic as remote-control fobs are, they still require us to press a button, meaning that we have to have them in hand.

Then came vehicles like the Toyota Prius, which open automatically once the appropriate key fob gets within range. That, too, is very handy, but for people who do a lot of schlepping -- which is many of us -- gaining access to the rear of most vehicles has remained a problem. With the rollout of the 2013 Escape, Ford addresses that thorny issue with a solution pulled straight from the Xbox Kinect and other gestural gaming systems.

The new Escape will debut in two weeks at the 2011 Los Angeles Auto Show. There, Ford will unveil the next Escape's completely hands-free liftgate. To open it, owners simply make a kicking gesture under the rear bumper while they have the key fob in their purse or pocket. Just as cool? The liftgate closes with the same motion.

The only potential problem we might see with Ford's new technology is that users have to get very close to the liftgate to activate it, then back up to avoid being smacked in the chin as the gate opens (or on top of the head when it closes). As this video demonstrates, though, there seems to be a built-in delay to account for the time users need to back up, and the gate opens and closes very slowly and smoothly:

The 2013 Ford escape goes on sale next spring. It's expected to come with three fuel-efficient engine options, including 1.6- and 2.0-liter versions of the Ford EcoBoost. The 2013 Escape will be built in Kentucky at Ford's Louisville Assembly Plant.