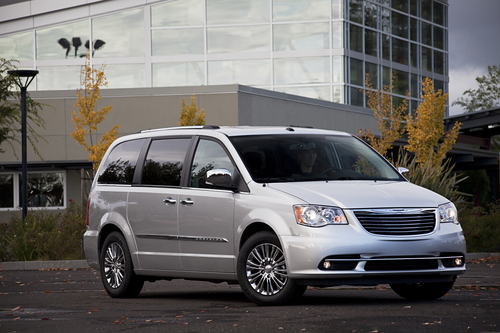 If you're in the market for a minivan, you might want to test out the 2012 Chrysler Town & Country and the 2012 Dodge Grand Caravan. Both have just been named "Top Safety Picks" by the Insurance Institute for Highway Safety.

To earn the title of "Top Safety Pick", a vehicle has to earn a rating of "good" in four crash tests: front, rear, side, and rollover. It must also have electronic stability control (ESC), which isn't much of a hurdle since ESC became standard equipment on all vehicles manufactured for sale in the U.S. after September 1, 2011.

Why all the focus on roof strength? In 2009, over 8,000 people died in rollover crashes on U.S. roads. That's roughly 25% of all U.S. traffic fatalities. While that figure may drop now that ESC is standard equipment on new vehicles (preventing rollovers from occurring in the first place), the IIHS sees increased roof strength as a key in protecting vehicle occupants during accidents.

The Town & Country and the Grand Caravan share a common structure with the 2012 Volkswagen Routan. Those three vehicles, as well as the 2012 Honda Odyssey and 2012 Toyota Sienna, are the only minivans to earn the "Top Safety Pick" rating during the IIHS's most recent round of testing.

This is very good news for Chrysler, which has cranked out quite a few "Top Safety Picks" over the past year, including the 2012 Fiat 500 and 2011 models of the Jeep Grand Cherokee, Jeep Patriot, Chrysler 300, Chrysler 200, Dodge Durango, Dodge Charger, Dodge Journey, and Dodge Avenger. Combined with last week's news that Jeep is currently the most reliable domestic auto brand, Sergio Marchionne & Co. should be popping the prosecco right about now (if only to make them forget about Fiat's current troubles in Italy).