Toyota Suspends U.S. Production Due To Floods In Thailand 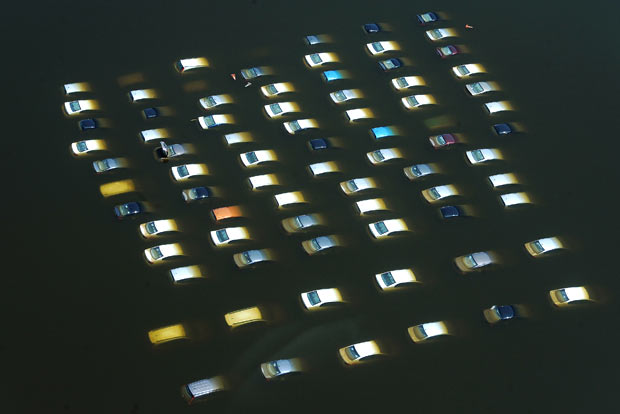 The floods ravaging Thailand have been back-page news in much of the U.S., but as the water continues to rise, it may finally saturate the headlines. The latest news is that Toyota plans to shut down production at U.S. facilities this weekend due to a shortage of parts from Thai suppliers.

The flooding in Thailand -- the country's worst in 50 years -- began in mid-July, and much of it has been caused by the Chao Phraya river, which is running at historic highs. Until recently, officials believed that damage from the floodwaters would be limited to rural areas, but within the past two weeks, they've changed their forecasts. Throughout the capital city of Bangkok, evacuations are taking place, and citizens are braced for the worst, which could come by the week's end.

To date, the Thai floods have killed at least 373 and affected another 2.5 million. They are also having a devastating impact on the country's business sector: earlier this week, we saw $12 million worth of new Hondas swamped by floodwaters and heard reports of potential hard drive shortages ahead.

Due to these difficulties, Toyota will halt production this weekend at assembly plants in Indiana, Kentucky and Ontario, Canada, as well as an engine factory in West Virginia. At the moment, the stoppage is expected to last just one day -- Saturday -- but depending on the severity of the flooding in Thailand, there could be more (and longer) shutdowns in the future. Toyota has already warned that the floods will impact availability of the 2012 Prius Hybrid, and other models could be affected, too. Since Toyota idled three plans in Thailand on October 10, it's lost around 37,500 vehicles in output.

The timing of these of events is unfortunate for Toyota and other Japanese automakers, which have been working diligently the past seven months to recover from the Tohoku earthquake and tsunami that struck Japan on March 11. That disaster caused more than 15,000 deaths and resulted in massive destruction to the country's infrastructure. (It also caused one of the worst nuclear disasters in history.) On Monday, Toyota reported that it would suspend overtime at all Japanese factories through this work week and scale back production estimates by 6,000 units.

At the moment, Toyota is the only automaker to announce a slowdown in U.S. production due to the Thai floods, but as the scope of the disaster becomes clearer, more may join the list. Stay tuned.