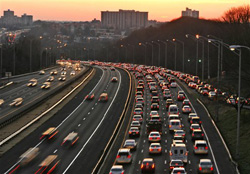 According to the Federal Highway Administration, U.S. drivers are spending less time on the road than they have in eight years.

The data comes from August 2011, during which cars and trucks traveled 263 billion miles on U.S. roadways. That's a drop of 1.7% compared to August 2010, and perhaps more importantly, it's the sixth straight month of declining road travel for Americans.

Travel slowed most in the Northeast, where the decline was around 2.2% compared to August 2010. Even in the less-densely populated West, road travel was down 1.2%. Of course, these statistics are all relative: in all, Americans still drove a whopping 1.978 trillion miles in the first eight months of 2011. That's the lowest number on record since 2003, but it's still the equivalent of making 263 trips across the solar system.

What's with the slowdown? There are at least three theories in circulation, with more likely waiting in the wings:

1) High gas prices mean that Americans can afford to buy less of it, and, in turn, travel less. (Of the theories posed here, this seems the most feasible, since gas sales are sliding, too -- though gas prices were also high in 2010, and Americans didn't seem to care.)

2) Unemployment remains high, which means that many commuters have likely been taken off the roadways. (Stats have supported this theory in the past, but now, the logic doesn't work quite as neatly. For example, the West has one of the highest unemployment rates in the nation and the Northeast has one of the lowest, so if unemployment and road travel were directly proportional, we'd expect to find travel most diminished in the West and least in the Northeast. However, precisely the opposite is true.)

3) Because of the touch-and-go economy, it's possible that more people are carpooling and using mass transit instead of going it alone. That's probably a far-fetched idea, though, since Americans have demonstrated an aversion to carpooling.

What about you? Are you driving less these days -- and if so, why? Feel free to drop us a note, or share your thoughts in the comments section below. For questions about how the FHA gathers data, click here.