Preventing Children From Dying In Hot Cars: Good Or Bad? 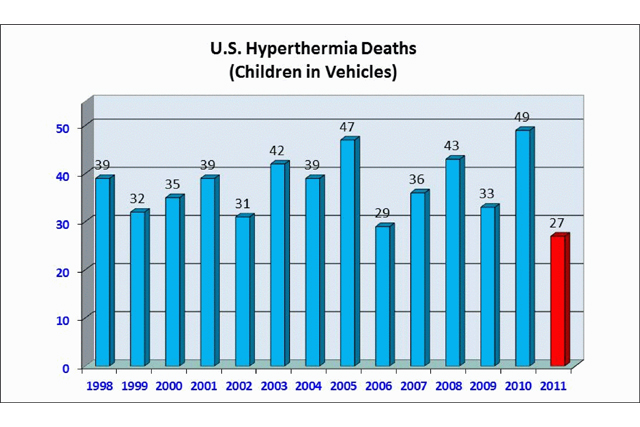 Statistics on children and heat stroke, via Ward's Auto

Every summer, we see dozens of headlines about children being left in hot cars. Many suffer heat strokes, many die. The National Highway Traffic Safety Administration has begun exploring new technology -- and new mandates -- that might cut down on such tragic incidents. But is that good or bad?

Between 1998 and 2010, 494 children died after being trapped in hot vehicles. The vast majority of those deaths -- 68% -- were the result of a child being intentionally left in a car or being forgotten by her caregiver. Most of the remaining 32% were caused when children became trapped in a vehicle while playing.

Roughly ten years ago, after numerous reports of children becoming trapped in car trunks, the NHTSA added a requirement that automakers include a glow-in-the-dark release mechanism inside trunks. That has likely reduced the number of child deaths from heat stroke, but clearly, we have a long way to go: in 2010 alone, 49 children died after being trapped in hot vehicles. That's the highest number in well over a decade.

As a result of these grim statistics, the NHTSA is exploring "countermeasures" to prevent children from dying of heat stroke when left in vehicles. Though the NHTSA hasn't gone into detail about those countermeasures, they would probably need to be deployed by automakers themselves. It's also likely that they're more high-tech than simple glow-in-the-dark latches.

Drew Winter at Wards Auto argues that education campaigns are the solution to the problem. He insists that if parents were made aware of the dangers of leaving kids in vehicles -- even on pleasant days where temps range no higher than the mid-70s -- much of this problem could be solved.

But to play devil's advocate, there are at least three arguments to be made in the NHTSA's defense:

1. The technological "countermeasures" that the NHTSA is likely exploring are in the pipeline anyway. Some cars already come with devices that monitor drivers and can tell when they're getting sleepy. We've written before about complementary technology that will keep tabs on other issues, too, like heart health. These developments -- made possible in part by joining nanotechnology and RFID chips -- will eventually be everywhere: in our clothes, our furniture, and so on. The car is not immune. The genie is way out of the bottle here. (For the curious, Dr. Michio Kaku discusses this technology at length in his latest book.)

2. Behind all the rhetoric that Winter uses to vilify "nannying" sits an implicit fear of being nannied. Winter is saying, in essence, "Back off, NHTSA. We've got this." That kind of hubris is always a little suspect. (It can also be dangerous: there's a reason that hubris is often the downfall of tragic figures in literature.) And besides, if we have the technology to make this happen -- as we said we do -- why not employ it?

3. Education alone may not be sufficient. It would be great to think that everyone with a child is interested in learning to become a better parent, but that's simply not the case. In the medical field, doctors recommend a two-pronged approach of education and treatment; in this case, "treatment" would be equivalent to technological deployment and/or regulation.

We tend to agree with much of what Winter says, but we also imagine that parents of the 494 children who've died over the past 13 years might have some very different opinions. Feel free to weigh in with your own in the comments below.