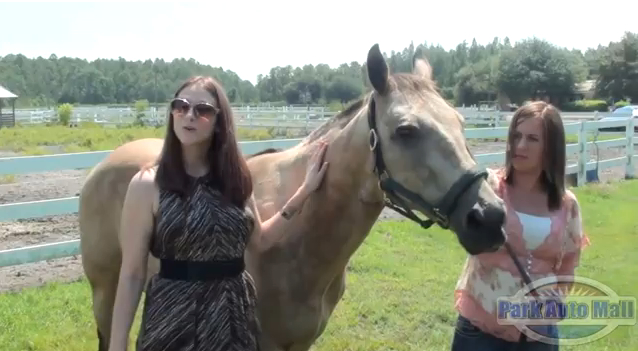 For sale, low miles, one horsepower.

Need further proof that the economy is about as healthy as a three-pack-a-day smoker living on the bacon and red meat diet? Ponder this: a Florida used car dealer recently took a horse in on trade for a family-sized van.

While a lot of dealerships claim they’ll take “anything” in on trade, that “anything” usually doesn’t extend to farm animals, family pets or items without wheels and an engine.

One Florida used car dealer has more liberal standards: Park Auto Mall had previously accepted a mobile home, artwork, signed sports memorabilia, jewelry and even an airplane in trade for its used vehicles, but the horse was a first for the dealership.

As CBS Tampa reports, the horse’s owner was a woman with no money and no other assets, who needed a van for her large family.  The horse, named Dallas, is an award-winning quarter horse, and Park Auto Mall saw value in a trade where others just shook their head and walked away.

As the economy continues its downward spiral, expect the barter system to return to prominence. Park Auto Mall may be the first used car dealer in recent history to take a horse in trade, but we’re betting that they won’t be the last.