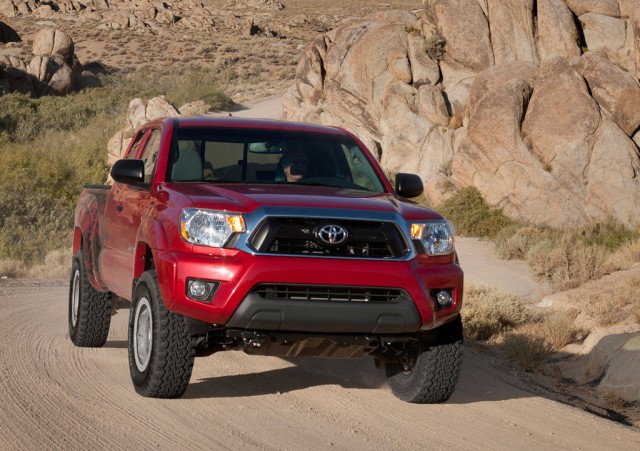 Just one day after Ford launched its 2012 Ford F-150 SVT Raptor, Toyota has rolled out a limited-edition pickup of its own: the Tacoma Toyota Racing Development (TRD) T|X (Tacoma Extreme) Baja Series.

The T|X Baja Series made its debut yesterday at the 2011 Texas State Fair -- appropriate, since the truck will be manufactured at Toyota's manufacturing facility in San Antonio. Though the vehicle on display was technically a pre-production model, it's not likely to undergo too many changes before it hits the assembly lines.

That said, Toyota admits that the T|X Baja Series is still in the testing phase. At the moment, it's slated to come with a 4.0-liter V6 engine and to offer buyers the choice of a six-speed manual or five-speed automatic transmission. Like other vehicles with the TRD package, the T|X Baja Series will have a boosted suspension system for off-roading and will feature an electronically controlled locking rear differential, Active Traction Control, Hill-Start Assist Control, and Downhill Assist Control. It will also come with a higher front ride height of two inches, BF Goodrich T/A KO tires, a TRD Cat-back exhaust system, and off-road wheels.

Of course, there'll be some cosmetic changes, too. Those off-road wheels will come with a special gun-metal gray finish, and the vehicle will be decked out in unique Baja Series graphics. The T|X Baja Series will also benefit from the new look of the 2012 Tacoma, including a redesigned hood, grille, and headlamps on the outside, and a revamped gauge cluster, steering wheel, and center stack on the inside.

The Tacoma TRD T|X Baja Series will likely appear on both Tacoma Access and Double Cab 4x4 models, and there's talk of making it available on PreRunner models, too. There's no word on pricing yet, but Toyota says that consumers should expect to see the T|X Baja Series in showrooms by the spring of 2012.

For a little more detail, check the preview at Motor Authority.