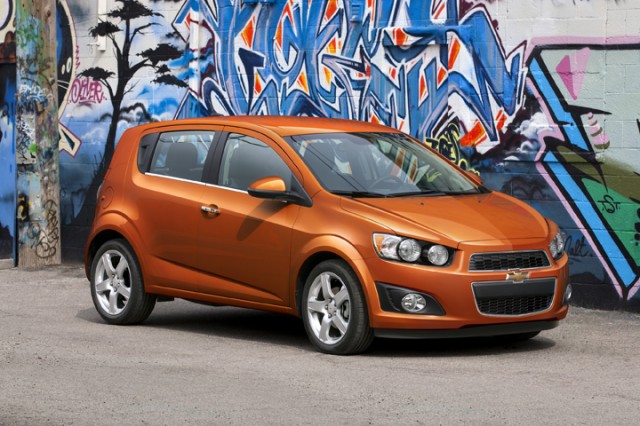 Small car fans, we have some good news: the 2012 Chevrolet Sonic has aced the full battery of safety tests from the Insurance Institute for Highway Safety. As a result, the IIHS has dubbed the Sonic a "Top Safety Pick".

To earn that prize, the Sonic had to perform well in four IIHS crash tests: front, side, and rear collisions, as well as a rollover. It also had to provide electronic stability control as standard equipment -- which wasn't a stretch, since there's a federal regulation requiring ESC on all vehicles manufactured for sale in the U.S. after September 1, 2011.

The final hurdle the Sonic had to overcome was the rollover test, in which the IIHS determined that the Sonic's roof could withstand a force equal to 5.37 times the car's weight. Given the Sonic's pint-sized stature, that may not seem like a very big deal, but it's a definite improvement over the Aveo, which the Sonic replaces in the Chevy lineup. The Aveo's roof could only support 3.09 times its weight in IIHS tests, putting it well below the 4.0 mark required to qualify as a "Top Safety Pick".

And yes, in case you're wondering: the IIHS rating applies to both the sedan and hatchback versions of the new car. For more details about the Sonic, check out Bengt's review, in which the subcompact scored a very respectable 8 out of 10.