Connect with our dealer and finance partners through our site and ask for details regarding their at-home car buying services.
OK
HomeNewsyoutube

Ford Builds An Explorer From Lego Bricks--And No, You Can't Drive It 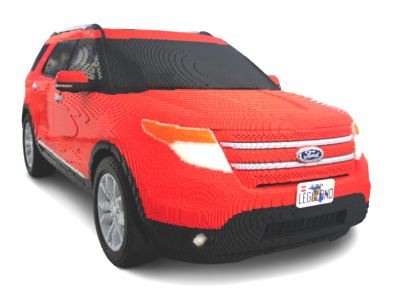 A 2012 Ford Explorer generally contains some 2,500 separate parts, and will take you nearly anywhere you need to go, on road or off (within reason). The newest Ford Explorer contains 382,858 parts, and you can’t drive it anywhere.

In fact, the doors don’t even open, and there’s no engine beneath its plastic hood. The newest Ford Explorer is built from Lego bricks and will be used to promote the Ford Driving School at Legoland Florida, after a brief stop at Ford’s Chicago Assembly Plant, where the “other” Explorers are built.

The 2,654-pound sculpture will be trucked from Chicago to Winter Haven, Fla., in a trailer with transparent sides, allowing motorists to see the life-size plastic replica. It took a team of Lego designers some 2,500 hours to lay out and construct the Explorer, so we’re guessing that the transport driver will be chosen for his long and unblemished safety record.

Once at the new Legoland Park in Florida, the Explorer will be displayed in front of the Ford Driving School attraction, which allows children as young as three to climb behind the wheel of speed-limited electric model cars. Designed to simulate driving in a neighborhood (built of Lego bricks, of course), drivers are cheered on by park employees known as “Model Citizens,” and receive souvenir Ford Driving School licenses at the end of the ride.