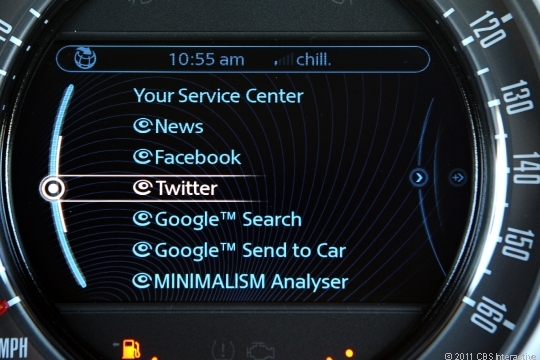 If you're the sort of adrenaline junkie who can't stand the thought of being left out of anything, we've got good news -- if you drive a MINI and own an iPhone, that is. The latest update to the MINI Connected app has text-to-speech capability, meaning that it can read tweets and status updates as you drive.

MINI Connected is already one of the better infotainment apps we've seen for cars. Not only does it feature the typical complement of news and radio services, but it also wraps in Google's Send-to-Car feature (handy for finding unfamiliar spots), as well as the MINIMALISM Analyzer, which tracks your driving habits and offers tips to improve fuel efficiency. And then there's our favorite part: the Dynamic Music feature, which rolls out different music according to your driving style.

The most recent update, however, ups the Connected app's social media credentials. In a nutshell,it includes text-to-speech support for Facebook status updates and tweets from Twitter, meaning that you'll always know what your friends are having for breakfast, and you'll never have to miss out on another in-store flashmob at J.C. Penny's. Somewhere, Oprah is beaming.

At the moment, it looks like the text-to-speech feature is confined solely to Facebook and Twitter, but don't be surprised if it creeps over to boost functionality in other ways soon -- including speech-to text. Buckle up.