2012 BMW ActiveE Needs Electronauts: Do You Have The Right Stuff? 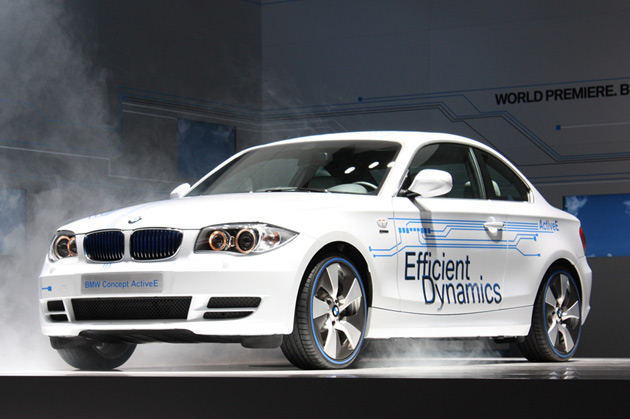 BMW is gearing up for a trial run of its 2012 ActiveE electric vehicle, but the automaker doesn't want just anyone in the test driver's seat. No, it's looking for "electronauts". Do you have what it takes?

There are three steps you'll need to follow in order to enroll in the ActiveE pilot program:

First, you'll need to fill out a reservation form at BMWUSA.com/ActiveE. (No need to rush -- it won't be available until later this year.)

Third -- and most importantly -- you'll need to sign a "closed-end, two-year lease" for the BMW ActiveE. That's notable because it likely means that drivers won't be able to purchase the vehicles they've leased, even if they want to.

That lease, by the way, is expected to run $499 per month, after a $2,250 downpayment. The figure may seem a high, considering that ActiveE lessees are really just luxury-level guinea pigs (chinchillas?). But on the upside, the monthly fee is expected to cover the costs of insurance, maintenance, and consumables, so perhaps it balances out.

Like those who took part in the MINI E trial, ActiveE lessees will be expected to record and share every detail of their ActiveE driving experience, and there will be a handful of mandatory face-to-face meetings with BMW staff. That may sound a little onerous, but there's something far worse in store for ActiveE lessees: they'll be known as "electronauts" (which, as terrible as it sounds, isn't entirely original).

Despite the lamentable name, we find BMW's push for ActiveE test drivers a little intriguing. By asking for drivers to help develop and improve its green vehicles, BMW is pitching the ActiveE to Gen X and Gen Y consumers, who have both shown a penchant for social causes. That's a bit more interesting than Ford's "Fiesta Movement", which was aimed at a similar demographic but centered almost entirely on building social media superstardom. The Fiesta created lots of buzz, but the ActiveE may generate some pre-launch loyalty.

To learn more about the ActiveE and what's required of would-be electronauts, have a look at this short video: