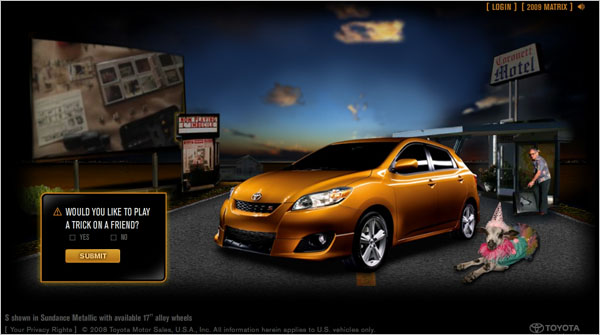 Toyota's 'Your Other You' campaign

Toyota's 'Your Other You' campaign

Toyota's "Your Other You" ad campaign for the 2009 Matrix was supposed to capitalize on the "punking" trend popular at the time. But when a woman got unknowingly dragged into the mix, things went off the rails. Now she's seeking $10 million in damages from Toyota, the company's ad agency Saatchi & Saatchi, and roughly 50 individuals associated with the campaign.

In the summer of 2008, Amber Duick began receiving emails from a man called Sebastian Bowler, who appeared to be a thuggish, beer-chugging, British soccer fan. In the emails, Bowler told Duick that he was driving across the U.S. and needed to lay low at her place for a while, following some "unpleasantness" at a motel that involved the smashing of a TV. He told Duick that he'd arrive in a couple of days and made it clear that he had her home address. Duick subsequently received an email from the manager of the aforementioned motel, along with an invoice for the television, arguing that she was responsible for the cost.

Naturally, Duick was confused and more than a little bit scared. She eventually received another email, which pointed her to a video explaining that it was all a hoax -- Bowler, the motel manager, everything -- but by then, the damage had been done.

And so, Duick did what any sensible American would've done: she hired a lawyer and slapped Toyota & Co. with a $10 million lawsuit. She claimed that she had suffered from emotional distress; unfair, unlawful, and deceptive trade practices; and negligent misrepresentation, among other things.

In the lawsuit's first round, Toyota argued that Duick had consented to participate. The judge didn't buy it, and now the case is scheduled to proceed. If we were in Toyota's shoes, we'd try to settle this one out of court.

It's times like this that we really wish we had a blog devoted solely to auto marketing. After all, no one spends more on advertising than the auto industry, so naturally, there's a lot to write about, both good and bad. Yesterday, we told you about the demise of one of our least favorite campaigns from GM -- "Chevy Runs Deep" -- but that was nothing compared to this bit of ill-conceived mishegas.

The fact that Saatchi & Saatchi devised the "Your Other You" campaign isn't surprising. After all, it's a forward-thinking agency, with a talented creative department. (Well, sometimes.)

What we can't believe is that a company as conservative as Toyota -- much less its legal team -- would approve a campaign that seems ripe for rampant misuse. Seriously, read this description, which, if you squint, looks like a forest of little red flags:

YourOtherYou is a unique interactive experience enabling consumers to play extravagant pranks. Simply input a little info about a friend (phone, address, etc.) and we’ll then use it, without their knowledge, to freak them out through a series of dynamically personalized phone calls, texts, emails and videos. First, one of five virtual lunatics will contact your friend. They will seem to know them intimately, and tell them that they are driving cross-country to visit. It all goes downhill from there.

Frankly, we have a hard time believing that Duick was the only person traumatized by this campaign. Expect a few more victims to crawl out of the woodwork soon.