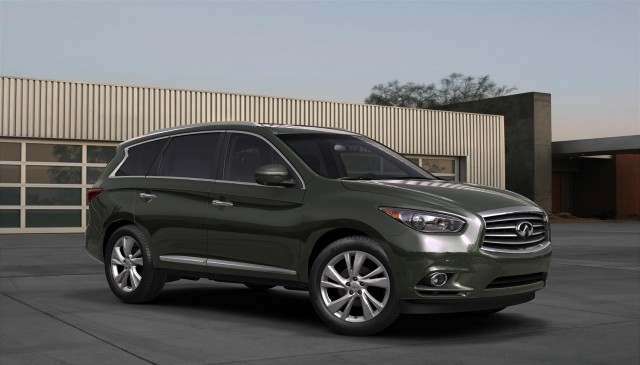 The pre-show for the 2011 Pebble Beach Concours d'Elegance is just revving up into full swing, but already the latest production cars and concepts are making their way onto the stage. Among them is Infiniti's JX Concept, a seven-seat crossover due for production for the 2013 model year.

Revealed in concept form today with the full production model to arrive at the 2011 Los Angeles Auto Show in November, the JX Concept previews Infiniti's next step in up-sizing the crossover. As its name suggests, it's larger than the EX and FX lines, yet not as large as the truck-based, off-road capable QX56 SUV.

Infiniti says the three-row luxury crossover segment is one of the fastest-growing of all, and should provide a "huge opportunity" for the brand. To that end, the JX aims to become the new benchmark for the class.

To reach that gold standard, The JX promises class-leading interior room, with a second-row seat that slides forward to make third-row access easier. As Infiniti's Americas vice president Ben Poore puts it, “With the JX, you will even be able to leave a child seat latched to the 2nd row while getting in or out of the 3rd row – just one example of the vehicle’s inspired flexibility and versatility. The 3rd row isn’t the typical penalty box either, with adult-sized room for all occupants and five-and-a-half inches of 2nd row forward-back adjustability.” 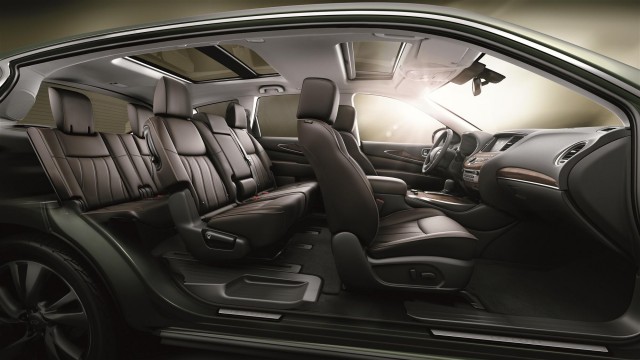 That interior will be fitted with a 14-speaker Bose Studio Surround audio system, Infiniti Connection Telematics, and Infiniti Personal Assistant--a personal concierge service to be offered free of charge with every 2012 and forward Infiniti vehicle. Safety equipment including Blind Spot Intervention and Backup Collision Intervention, which can engage the brakes to prevent collisions when the transmission is in reverse, will also be available.

Power for the JX comes from a V-6 engine, driving either the front wheels or all four wheels. A continuously variable transmission is standard across the range, equipped with a gear-mimicking step system for the Sport mode. Full details on the drivetrain will be revealed at the Los Angeles show in November.

The JX's styling is also a step forward for Infiniti, which says the large crossover advances the design language started with the Essence concept, including some of those cues in the front grille and headlight design, the crescent-cut D-pillar, and the overall shape of the roof and cabin.

Other focus areas for the Infiniti JX include flexibility in use of interior space and safety. For more of our Pebble Beach coverage, click here.