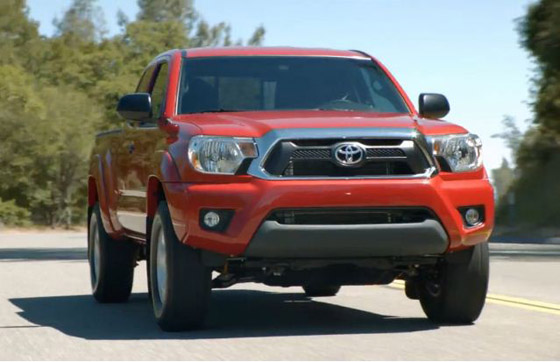 The 2012 Toyota Tacoma will bow later this year with a mild facelift that incorporates some of the automaker's newest infotainment technology.

The Tacoma was spotted on Web video this morning by PickupTrucks.com, which reports the unofficial video reveals the first details of the lightly restyled truck, Toyota's mid-size pickup and the smaller sibling to the massive Tundra full-sizer. The video can be seen via the links below.

Toyota hasn't confirmed that this is the new Tacoma, but earlier this year the company did confirm to TheCarConnection that a new Tacoma would arrive in the fall, and would feature Entune, a SYNC-like system that lets drivers control their smartphones through dash or voice controls. The system is also planned for the Toyota Prius V wagon, also due to arrive later this year.

PickupTrucks says an on-sale date of October is in the works for the Tacoma, which also is moving from its former production base in Fremont, Calif., to a plant in Mexico. The Fremont plant was sold to upstart electric-car maker Tesla last year, and it's planned to be the home of Model S production.

We'll have more on the new Tacoma as details are confirmed.