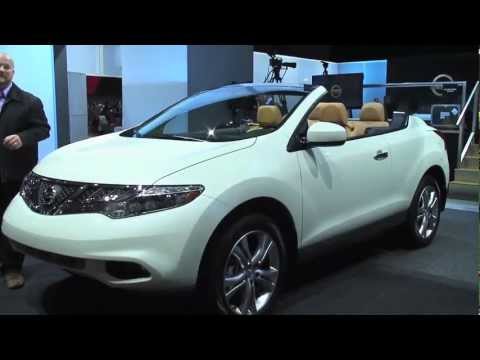 There are a lot of great cars in showrooms these days -- and a lot of losers, too. Now, it seems that auto journos have unofficially dubbed one of those less-memorable rides to be the worst of all: the 2011 Nissan Murano CrossCabriolet.

Even though the CrossCabriolet is fairly new to the marketplace, it's already received a mountain of bad press. Critics have attacked its poor performance ("a front-end shake that would mix a good daiquiri"), its steep price point (upwards of $46,000), and most of all, its distinctly weird appearance ("an artichoke on wheels").

A handful of folks have come to the CrossCab's rescue -- some of them women who seem to enjoy the high seating position and the vehicle's cushier creature comforts, like, well, a heated steering wheel. But nearly all of the CrossCab's saviors have been shouted down by reviewers who feel very strongly that the CrossCabriolet is a serious waste of consumer's money (not to mention the dough that Nissan spent developing it).

Our own Bengt Halvorson does his best to be kind to the poor thing, but he can't help calling it a "head-scratcher" with "some strange proportions, to put it kindly". He tries to cut the CrossCab some slack for being delayed by the Tohoku earthquake and tsunami that hit Japan on March 11, but it's impossible not to compare it to much better luxury rides.

In the CrossCabriolet's defense, we should point out that the model is so new that few folks have had the chance to see it up close -- much less drive it. Public opinion may even out down the road, just as it did for the 2010 Honda Accord Crosstour. (Remember the hate being leveled that that one?) That said, the CrossCab seems far more ungainly than the Crosstour, so maybe it's beyond saving.

Of course, we're not even halfway through August, so there's still plenty of time for the Murano CrossCab to get booted from its bottom berth. (At least, that's what Nissan keeps telling itself.) Do you agree with journalists' assessments? Is the CrossCab the bottom of the barrel? Or do you see something far more hideous slouching toward your local showroom? Let us know in the comments below, or on The Car Connection's Facebook page.