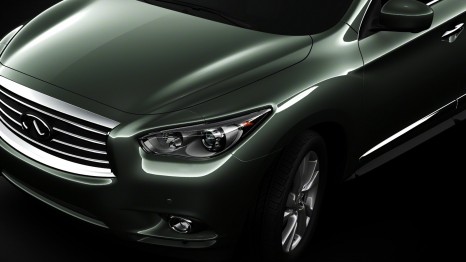 Here’s what we know about the 2013 Infiniti JX luxury crossover so far: it will seat seven, which makes it larger than Infiniti’s FX series of crossovers. It’s more conservatively styled (read: less controversial) than the Infiniti FX series, too. Finally, it’s set to make it’s first public appearance at the Pebble Beach Concours d'Elegance later this month, with a production version to be shown at the Los Angeles Auto Show In November.

This is week five of Infiniti’s “Power of 7” social media campaign relating to the upcoming launch of the JX. Not counting the original design sketch released in April, it stands to reason that there are two more preview images coming our way, and we hope that at least one gives us an idea of what the inside will look like. Infiniti’s crossover vehicles have always been a bit bolder, both inside and out, than most of the competition. We hope that the conservative lines of the JX’s exterior don’t translate into an interior that’s less than inspired.

We’ll know soon enough, but if you really want to get a feel for what the upcoming 2013 Infiniti JX is liable to look like, check out the spy shots published on MotorAuthority.