Got A Red-Light Ticket In L.A.? Don't Sweat It, Forget It 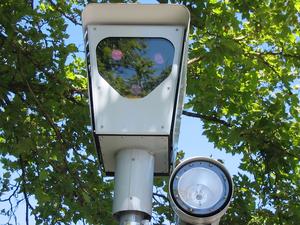 Los Angeles city officials are contemplating whether red-light cameras are going to have any future within city limits, and have already recommended the program be phased out--and that ticketed citizens should forget about the violations.

The City Council reached a consensus at the end of its most recent hearing that the red-light camera program should be phased out, and that it will stop issuing tickets based on the system at the end of the month. The tickets already handed out are to be considered part of a "voluntary payment program," says the L.A. Times, with no penalty for non-payment.

More precisely, the consequence for not paying a red-light fine is a phone call from a private collection agency asking you do pay up--neither California nor the City of Los Angeles will take any action against violators' driver's licenses or civil/criminal records.

Red-light cameras are currently the subject of much debate across the country, with drivers in New York in favor of them, Los Angeles officials clearly opposed, and much of the rest of the country somewhere in between, but averaging out to 69 percent of Americans in favor. We recently asked where you stand on the law-enforcing/revenue-generating devices, and the results showed most of you are against them.

Where do you stand on red-light cameras now? Let us know your preference, and the reasons you like/dislike the cameras in the comments below.