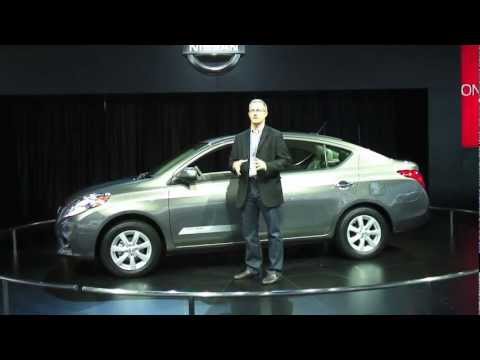 The 2012 Nissan Versa sedan represents a ground-up redesign, and Nissan wants you to know that it’s got the lowest starting MSRP in America.

There’s fine print to that, and Nissan is quick to point out that their referenced price of $10,990 is actually set by the dealer, and that the information was accurate for compact-class competitors when written.

Those disclaimers out of the way, it’s clear that Nissan is proud of what they’ve accomplished on the new Versa, and it’s equally clear that they’re intent on gaining market share in the compact sedan segment.

The 2012 Versa sedan is built on a new global platform that uses 20 percent fewer components and weighs about 150 pounds less than its predecessor did, which aids in both fuel economy and performance.

The 1.6-liter, four cylinder engine is new for 2012 as well, and features such advanced technologies as dual fuel injectors mounted near each cylinder’s intake valve. The dual injectors deliver a finer spray than a single-injector design, which helps to reduce emissions by ensuring more thorough combustion.

A five speed manual transmission is available on the entry-level 1.6 S model, with all other variants getting a next generation Xtronic CVT transmission. The new CVT design boasts a gear range wider than even a typical seven speed automatic transmission, which helps the Versa achieve 30 mpg in the city, 38 mpg on the highway and 33 mpg combined.

The base Versa 1.6 S, with a five speed manual transmission, starts at $10,990. Add the new Xtronic CVT, and the Versa 1.6 S goes to $12,760, but also lets buyers add a factory-installed cruise control package.

Opt for the SV model, and the sticker hits $14,560, but consumers can purchase a factory-installed convenience package that includes Bluetooth phone integration. The range-topping SL stickers for $15,560, but that’s the model you’ll need to choose if you want a navigation system, part of Nissan’s factory-installed Tech package.

Nissan’s Versa 5-door hatchback returns with only minor changes for the 2012 model year, and the automaker is expected to announce pricing on the hatchback later this month.