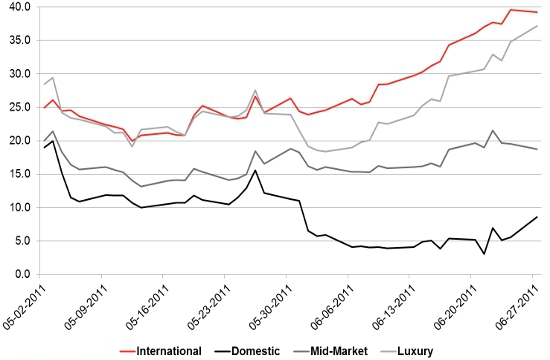 Last week, we reported on June auto sales stats, which showed big gains for America's Big Three, as well as for German and Korean marques. But a new survey from YouGov hints that Detroit's triumphs may be short-lived if automakers don't begin to address some serious image problems.

YouGov is a major marketing survey firm that draws on a pool of 1.5 million respondents to determine how the public views certain companies. Those people rank the companies in question with numeric scores ranging from -100 (the pits) to 100 (perfection), with 0 indicating a neutral opinion. The scores measure "overall brand health incorporating sub-scores of quality, satisfaction, value, impression, reputation and willingness to recommend."

YouGov also tracks industry segments -- in our case, the domestic, international, mid-market, and luxury auto segments. The firm's most recent survey indicates that luxury and international marques are sitting firmly in positive territory, with scores ranging between 35 and 40. Domestic brands, on the other hand, seem to have lost their luster, slipping from a score of just under 20 at the beginning of May to below 5 in the latter part of June.

The company attributes Detroit's problems to quality issues, citing 11 recent Chrysler recalls and the Big Three's ongoing problems with telematics systems (the kind of problems that caused Ford to tumble in J.D. Power's latest Initial Quality survey). Although YouGov doesn't hazard any guesses about why international and luxury brands are doing so well, we'd suggest that maybe (a) they're benefiting from Detroit's troubles, and (b) the economic recovery has made luxury rides more attractive again.

Of course, what consumers say (on surveys) and what they do (in showrooms) aren't always the same thing. That may explain the discrepancy between June's sales stats and Detroit's poor brand performance. But the Big Three are clearly suffering from image problems -- even Ford, which didn't have to recover from the stigma of taking federal bailout dollars during the recession. That may not have an impact on sales now, but down the road...well, that's a different story.

2021 Nissan Armada costs at least $1,000 more, starts at $49,895
Comments (0)
Commenting is closed for this article
Contribute
Send us a tip Comment Contact the editor
Follow Us