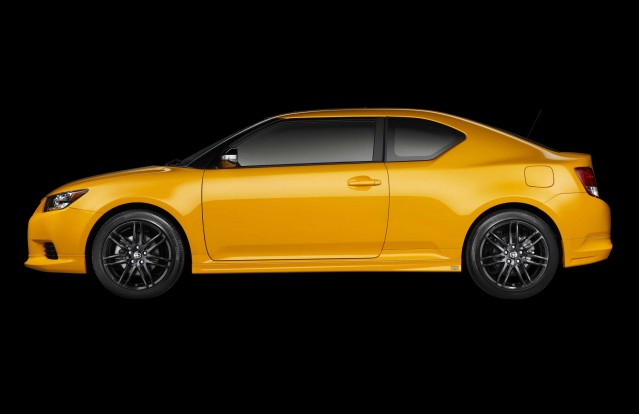 If you’re in the market for a new Scion tC or xB, we’ve got good news and bad news. Since we’re glass-is-half-empty people, we’ll give you the bad news first: you’ll pay more for a new Scion than you did in 2011. Now the good news: you’ll get more content, and the base price of both Scion models only increases by $300. There’s a special edition of the Scion tC for 2012 as well, called the tC Release Series 7.0 (or simply the tC RS 7.0).

Scion tC RS 7.0 models come painted in High Voltage yellow with black side mirrors and black 18-inch alloy wheels. There’s a TRD body kit that includes a unique honeycomb grill on the front fascia, along with a rear valance and side skirts. Inside, RS 7.0 models get High Voltage yellow accents on the black seats and have yellow stitching on the leather-wrapped steering wheel. A Smart Key is used for the first time on a Scion product, so a push-button start is standard on the limited production RS 7.0 models. Only 2,200 copies will be built, at a starting price of $21,625 for a manual transmission version or $22,625 for one with an automatic transmission. Both prices include a destination charge of $720.

Base model Scion tCs will start at $19,295 with a six-speed manual or $20,295 with a six-speed automatic transmission. For 2012, all tC models get a 300-watt Pioneer audio system (with a 340-watt Pioneer Premium system as an option), Bluetooth phone integration and streaming audio, iPod / USB connectivity, an auxiliary input jack and a subwoofer RCA output jack that allows use of an external amp. The tC also comes with Scion Service Boost for 2012, which covers both scheduled service and emergency roadside assistance for two years or 25,00 miles.

Like the tC, the 2012 Scion xB gets new audio systems and Bluetooth phone and audio integration. The standard audio system is a 160-watt Pioneer unit, but buyers can upgrade to a 200-watt Pioneer Premium audio system. Both include iPod / USB connectivity, an auxiliary-in jack, and a subwoofer RCA output for adding external amps.

The xB comes as what Scion calls a “mono-spec” vehicle, meaning that buyers need only choose between manual and automatic transmissions (since things like the upgraded audio system are dealer-installed options). For 2012, a Scion xB with a five-speed manual transmission starts at $17,020, while a four-speed automatic equipped xB will run $17,970. Both prices include a destination charge of $720, but the destination charge may vary slightly in the Southeast or in the Gulf States.