GMC Loans Trucks To Nonprofits For Its 2012 Catalog Photoshoot 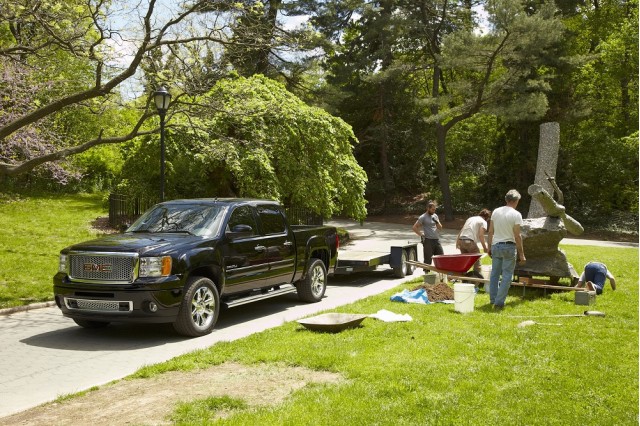 If you're a regular reader of auto sites like this one, you've probably noticed something peculiar about the promotional pics of new vehicles -- namely, that many of them look the same. There's your standard car-on-road shot, the car-next-to-edgy-office-building, and of course, the truck-hauling-boat-to-lake photo. It can be a little predictable.

Perhaps that's why GMC has opted to shake things up for its 2012 catalog. Rather than snap one more pic of a Sierra loaded up with four-wheelers, GMC loaned vehicles to nonprofits across the country to help them perform much-needed tasks, and it took photos of the work as it was done.

For example, the company gave an array of Savanas, Terrains, and other models to help a U.S. quadriplegic rugby team called the Texas Stampede get back and forth to workouts. And in Bradenton, Florida, GMC gave three Sierras and a Canyon to the Geraldson Community Farm so they could pick up and install a water conservation system.

Of course, the nonprofits and community groups that received the vehicles had to return them when they'd completed their projects, but still, it offered them a chance to save money and GMC an opportunity to snap some interesting photos of its newest rides, complete with backstories.

This isn't the first glimpse we've seen of GMCs in nonprofit settings: last year, the GM Foundation donated 30 GMC vehicles to help relief efforts in Haiti after the devastating earthquake.

For more information about the loaner project, check out the GMC press release below.

DETROIT – When new vehicle shoppers open the 2012 GMC catalog, which arrives at dealerships this summer, they will see the brand’s professional grade pickup trucks, SUVs and crossovers doing real work in real-world settings.

GMC’s Sierra, Yukon, Acadia, Terrain, Canyon and Savana will be seen in real-life community service projects such as towing a rainwater cistern on a farm in Florida, hauling historic yacht construction supplies and a 12-foot-wide metal sculpture in New York, transporting quadriplegic athletes to team workouts in Texas, and towing a livestock chute at a wild horse sanctuary in California.

“GMC vehicles help organizations and individuals across the country get work done every day, on projects that rarely get the attention they deserve,” said John Schwegman, U.S. vice president, GMC Marketing. “That is why GMC is providing vehicles to five projects that are making a positive impact in their communities.”

-- Three Sierras and a Canyon to Geraldson Community Farm in Bradenton, Fla., for the delivery and installation of an innovative water conservation system;

-- Three Sierras and two Acadias to haul supplies for The Onrust Project in Schenectady, N.Y. The Onrust, five years in the making, is a replica of the first Dutch yacht built in America using authentic 17th century Dutch building techniques. When finished The Onrust will be a floating museum and classroom for teaching the early European history of the Northeastern United States;

-- Three Sierras, a Yukon and a Terrain to transport raw material and three metal-worked sculptures for public exhibit made along the Appalachian Trail at Harmony Ridge in Branchville, N.J., by renowned artist Robert Lobe. The 12-foot-wide tree sculptures were moved from Lobe’s studio space in Newark to Prospect Park in Brooklyn;

-- A group of GMC vehicles, including Savanas to Terrains, helped transport a U.S. quadriplegic rugby team, the Texas Stampede, and its equipment to and from workouts and scrimmages in Texas;

“Hauling materials to build a 30-ton 17th century historic yacht is not for the lightweights. GMC vehicles are heavy duty, but handle like a Sunday drive in the park,” said Don Rittner, president of The Onrust Project. “When we had to move a ton of 400-year-old wood from the boat shed to the warehouse, the GMC Sierra made it seem like we were hauling toothpicks.”

The new GMC catalog also is the first to have digital interactive and social media components. There are embedded quick-response codes that allow smartphone users to access a custom mobile site with exclusive video about the vehicles and these community projects, and link to the GMC Facebook Community Projects tab enabling fans to learn more.

GMC also is issuing a version of the project’s mobile site for those with camera-enabled tablets such as the Apple iPad 2.

“The way consumers connect with brands and research their next vehicle purchases is different today than it was just a couple of years ago,” said John Gasloli, GMC advertising and sales promotion manager. “The 2012 catalog provides customers with a multimedia format, fully integrating photography and video, print and social media.”