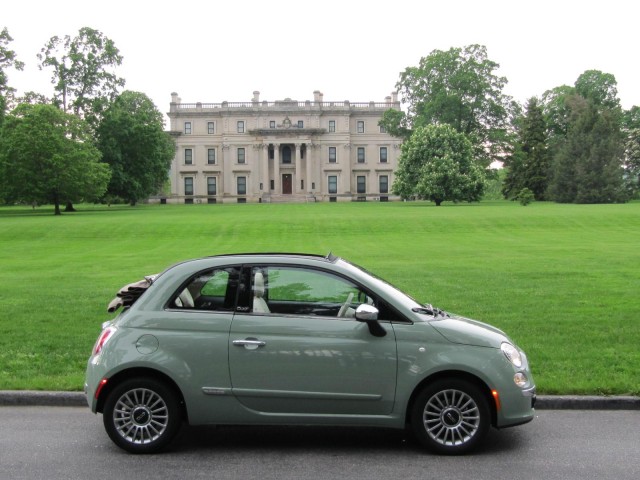 When a guy in a glossy black twin-cab diesel pickup truck leans out the passenger window with a camera to take your picture--and you're driving a tiny avocado green 2012 Fiat 500C Cabrio with the roof rolled down--you know this is an unusual car.

Not since the introduction of the 2002 Mini Cooper has such a small car made this big an impact on the U.S. market.

We're still not sure if it was just the fact that the car was a 2012 Fiat 500, or the Cabrio model specifically, that drew attention from our new pickup-truck friends. They may not, in fact, have noticed the clever cloth roll-back roof that opens the top of the car while keeping the structure largely intact.

The 500C Cabrio is less distinctively a convertible than either of the two cars Fiat identified as competitors: the Mini Cooper Convertible and the Volkswagen Beetle Cabrio (just about to be replaced with an all-new model).

Those cars have only cloth above the beltline; the Fiat has sheetmetal. Looking at it from the side, you might not notice the roll-back roof.

We enjoyed our time in the convertible Fiat 500 and, frankly, struggled to find huge differences between it and the standard Fiat 500 hatchback--beyond the obvious, of course, which is that the multi-layered power cloth roof slides back to drop into a stacked pile on top of the decklid, opening the panel between the header rails to the sky.

In the end, the remarkable thing about the convertible Fiat 500 was that it corresponded perfectly to our assessment of the hardtop.

We liked the expressive sheetmetal, unique and distinctive interior styling, the high-revving little 1.4-liter engine, and the steering feel.

On the downside, it's not quick, it's small inside, and the gas mileage is decent but hardly stellar for something a full car class smaller than, say, a 2011 Hyundai Elantra compact.

As noted, the 2012 Fiat 500C Cabrio is less distinct from its standard hardtop cousin than either the Mini or the VW Beetle. Its doors are are fully framed, there's a substantial metal rail above them, and even the body-side pressings are shared with the hatchback.

Aside from a rear trunk-lid where there had been a full hatch, and the cloth roof covering--available in black, beige, or red--that wrapped down and around the glass rear window, there's little to identify the drop-top against the entire missing upper section of the Beetle and Mini.

The contrasting roof colors, if you spec your 500C that way, make the Cabrio distinctive. But if you get a black rollback roof on a black car, we bet virtually no one notices that it's a Cabrio. They'll just register that it's a 2012 Fiat 500.

And, boy, will they notice. And point.  And stare. And take photos.

The main thing to know about driving the 2012 Fiat 500C is that you have to rev the 1.4-liter engine to get any power out of it. Italian engines stereotypically generate power only at the high end of their ranges, and this one doesn't put out any appreciable oomph until it's past 2500 rpm.

That's fine, if you know the drill and make sure to stay one gear lower than you might expect to be in another car. The five-speed manual transmission (offered only on the lower-line Pop model) lets you adjust the gears, and you'll soon learn to downshift if there's even a hint of a need for power. 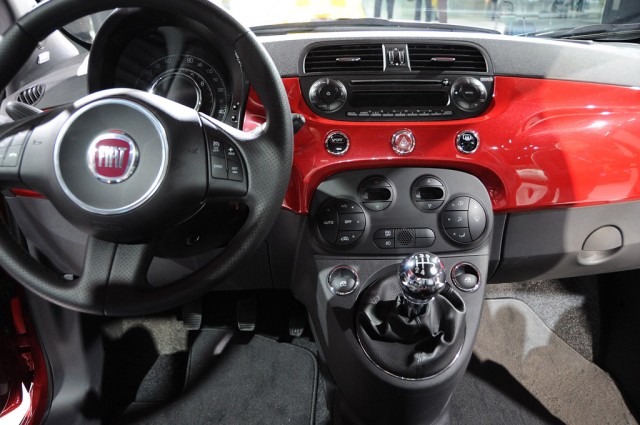 In the six-speed automatic, however, any demand a driver makes for rapid acceleration produces not one, but two downshifts before the little engine generates enough juice to move this minicar out of harm's way.

The handling is tight and sharp, though if you enter a turn too fast, the Fiat 500 behaves like a standard front-wheel-drive car, plowing through the corner until you lift off and let it correct its line.

Admirably, the soft-top model is only 53 pounds heavier than a comparably equipped hatchback, so there's little if any perceptible difference in the handling between the two body styles.

Feels wider than it is

The 500 is quite deceptive when you try to assess how big it is, or how much space it has inside. Somehow the shoulder room appears to be the widest part of the car, almost as if it's rowboat-shaped, with the front and rear narrowing behind the front passengers' seats.

The dashboard is deepest and tallest at the center, with the ends receding both vertically and in depth to meet the windshield pillars.

And it's not until you look at things like the sun visors (small), the hazard-warning light button (ornate, but tiny)--even the dash-top plastic molding--that you realize just how small the 500C really is.

Which is good, since it disguises the small size that may make many Americans reject it out of hand.

Our 500C prototypes were well screwed together, on the whole. One possibly had a flaky cruise control, and another had an early howling sound that went away as it warmed up. But we didn't experience any of the squeaks, creaks, or groans that even much pricier convertibles exhibit. 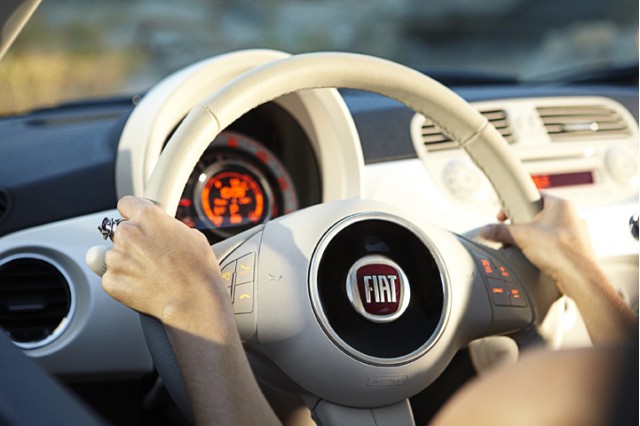 And in terms of rigidity, the 2012 Fiat 500C is light-years away from the flexible 2011 Volvo C70 we tested earlier. That car's front and rear sections seemed to move in different directions going over angled railroad tracks, whereas the 500C felt rock-solid and all of a piece no matter what we did to it.

Fiat says the 500 Cabrio is 70 percent stiffer and 40 percent quieter than its nearest competitors, the Mini Cooper Convertible and VW Beetle Cabriolet. We don't doubt it.

It's also remarkably quiet with the top in the halfway rolled-down position, and hushed enough with the top up for a conference call on a mobile phone to be completed without any interference. And not every cloth-top car sold in the U.S. can say that.

The Fiat 500C Cabrio has the same seven airbags as the hatchback, and its structure is relatively little changed.

To maintain structural stiffness, the 500C has reinforcements in the header rail above the windshield, the rear wheel wells, and the rear shelf area above the trunk--which is all new and replaces the wide opening offered by the hatchback in the same place.

Rear vision with the top all the way down isn't good for any driver, and even taller drivers have trouble seeing past the large blind spot in the rear three-quarter area.

We liked the "fish-eye" mirror on the trailing edge of the driver's outside mirror, which showed the car's blind spot better than any system we've seen. We also liked the small size and round shape of the rear-seat headrests, some of very few we'd seen that don't impede vision through the rear window.

No rear-vision camera is offered in any trim level.

One surprise: The cloth top can be moved from closed to half-open, or vice versa, at up to 50 mph. And it will drop all the way, or erect itself up to halfway open, at speeds up to 40 mph.

That's a huge advantage when it starts to pelt huge drops of spring rain, as we learned, not to mention avoiding the need to pull over in hazardous conditions just to put the top up.

That's a big jump from the base hatchback's price of $15,500, though Fiat says its earliest customers are so passionate about the car and the brand that they become advocates and evangelists--meaning they're not shopping on price. 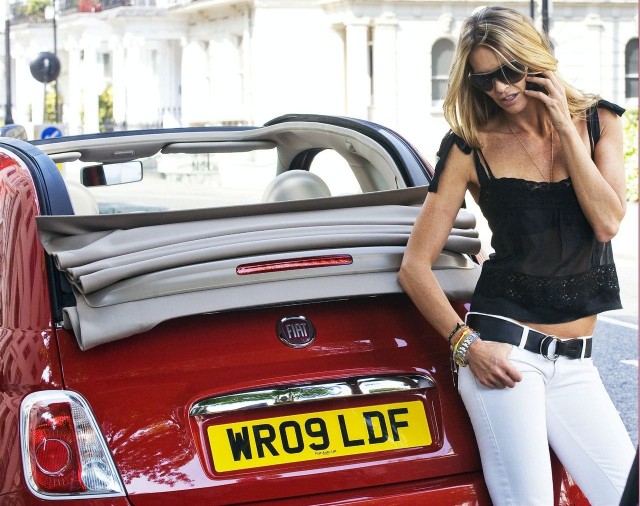 Customization is a huge part of the Fiat 500 appeal, with 14 exterior colors, 3 different top colors, 12 separate interiors, 21 exterior trim items, adding up to roughly half a million different ways to configure your 500. Certainly of the dozen or more media drive cars, no two were alike.

We had a few little quibbles: Operating the windshield washer didn't automatically trigger the wipers, as it does on most other cars. There was no auto-up/auto-down on the driver's window on our test cars. And we'd have preferred a rotary knob for radio volume to the up and down arrow buttons the Fiat provides.

A nice challenge to have

But perhaps these quibbles add to the car's slightly exotic flavor. The front window switches mounted on the console rather than the door panels certainly showed the 500's European roots in our book.

In the end, the 2012 Fiat 500C Cabrio is just as much fun as the hardtop, but with the added advantage of wind in your hair and a particularly slick power cloth top.

Whether it's worth the several-thousand-dollar premium is an individual choice, but Fiat executive Laura Soave said that the company had originally projected a 10-percent share for the Cabrio.

Was that the right number? No, she said, "we undercalled it" and are seeing a far higher proportion of Cabrios among total Fiat 500 sales.

It's a nice problem to have.

Fiat provided breakfast at a swanky Manhattan hotel, and lunch at a riverside bed & breakfast in the Hudson Valley, to allow High Gear Media to bring you this first-person drive report.