Can A Virtual Celebrity Help Sell The Toyota Corolla? 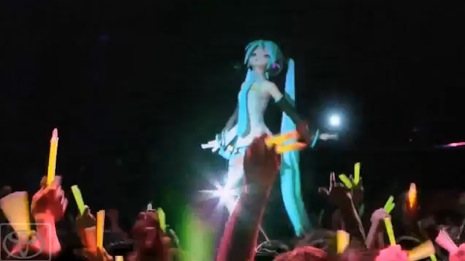 If you live in the United States, chances are good that you’ve never heard of Hatsune Miku. In Japan, the young pop star has a huge following, and played a series of sold-out concerts across the country in 2010.

Instantly recognizable by her floor-length, turquoise-colored hair, Miku has one problem that even fame and fortune can’t overcome: she doesn’t really exist.

Miku is an anime character, albeit a hugely popular one, created by Cypton Future Media. For concerts, a three-dimensional image of Miku is projected on stage, and her million-dollar voice comes from a collection of real voices filtered through digital synthesizer software.  Part of her appeal is that she encourages fans to dream big, and Toyota is playing off this message in an ad campaign targeted towards Asian-Americans in the United States.

Per Toyota’s website, both Miku and the Toyota Corolla, “have two very important things in common – big dreams in a compact package.” A Toyota spokeswoman took that idea one step farther, telling The Wall Street Journal that, “Even if she is unfamiliar to some, the story of her character, her music and her dedicated fans are intriguing and in parallel  with the storied history of the Toyota Corolla.”

That may be the case, but many see Miku as relevant only to children and hard-core anime fans. Will her presence help Toyota move Corollas from dealer lots? The company thinks the answer is “yes”, and has scheduled Miku’s ads to air on Asian-language television stations as part of a broader social media campaign.

(The Wall Street Journal, via The Consumerist)