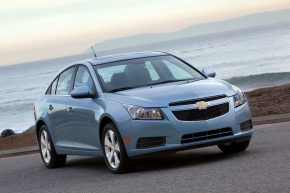 According to the automaker, in about 154,000 Cruze models, the intermediate steering shaft covers need to be inspected for proper installation, while the automatic-transmission shift linkage needs to be checked in more than 120,000 Cruze sedans. All of the affected Cruze models were built in Lordstown, Ohio, and about 129,000 of those 154,000 Cruze models recalled are in the U.S.

The concern with the steering issue is that the shaft might not have been properly installed; GM cited one complaint in which the owner, in a parking lot, turned the steering wheel without a change in direction from the vehicle. Likewise, the automatic transmission shifter could potentially still be in gear when it's in the 'Park' position.

This isn't the first steering-related issue for the Cruze, or for compact GM sedans. Just last month, GM recalled some Cruze models for a steering-wheel issue, in which it might not have been properly fastened to the steering column at the factory. The action had been prompted by an incident in which the steering wheel actually detached into a Minnesota driver's hands at 65 mph.

Since the recall doesn't actually involve any redesigned parts, expect to hear from General Motors soon regarding the recall effort; otherwise you can call Chevrolet at 800-630-2438, or check in with the GM Owner Center.