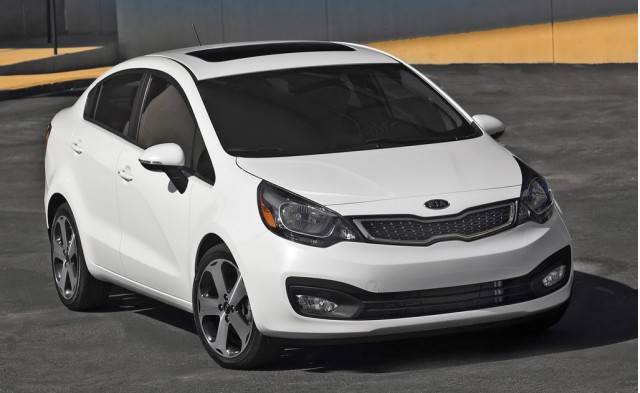 The 2012 Kia Rio makes its debut today at the 2011 New York Auto Show, in both four-door sedan and five-door hatchback form.

The Rio and Rio5 are part of the wave of 40-mpg cars highlighting this year's show. In both body styles and both drivetrain configurations, the Rio will hit the new magic number for economy--a figure touched on by the Hyundai Elantra, Accent, Veloster and Sonata Hybrid; by the Ford Focus and Chevrolet Cruze; and by Kia's own Optima Hybrid, which goes on sale at the end this quarter.

Lighter in curb weight than before, the new Rio also has a new powertrain: a 1.6-liter four-cylinder with direct injection and a choice of six-speed transmissions, manual or automatic. The 138-hp four earns an estimated EPA fuel economy rating of 30/40 mpg. Interestingly, the Rio also incorporates stop/start technology, which turns off the engine when the car is stopped for more than a few seconds, to conserve fuel and to contribute to the strong gas-mileage numbers.

Kia claims gains in the Rio's passenger space, thanks to a wheelbase that's grown to 101.2 inches. The hatchback's rear seats fold down for better cargo capacity, too.

The Rio SX also adds on UVO, the Bluetooth-driven entertainment controller that uses voice commands to steer the car's audio and phone controls. The video embedded below gives you an idea of how UVO works in a prototype installation in Kia's Optima sedan.

We'll have more live photos of the Rio later today, and more on the car itself later in the year.