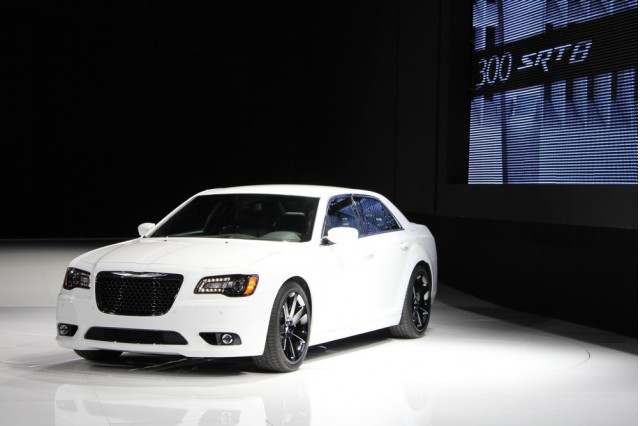 With first driving impressions logged in the win column, the latest Chrysler 300 is doing all it can to earn a sedan smackdown with a new SRT8 edition coming for the 2012 model year.

In SRT8 trim, the 300 drafts the big 6.4-liter HEMI V-8 already stuffed into the Dodge Challenger into service. With 465 horsepower and 465 pound-feet of torque, and more of it available at lower engine speeds, the 300 SRT8 it snaps off 0-60 mph times just under five seconds, by Chrysler's estimates--which probably translates into a 4.5-second time once it's subjected to some more leaden feet. Chrysler's also betting on a quarter-mile time of under 13 seconds, and a top speed of 175 mph.

Since the HEMI still sports cylinder-deactivation technology, Chrysler says fuel economy will be boosted by up to 25 percent on the SRT8 model. It's mated with the current five-speed automatic--not the eight-speed automatic due in the 300/Charger for the 2012 model year--but Chrysler does confirm paddle shifters will be included with the SRT8, in tandem with a shifter-activated manual mode.

Adaptive suspension controls are added to the SRT8, with drivers given a choice of Auto and Sport modes that govern shock settings based on readings from steering, throttle, yaw and other engine sensors. The suspension itself sits a half-inch lower than the stock sedan. Steering remains hydraulic, though--while the rest of the the 300 lineup has adopted electro-hydraulic steering for slight efficiency improvements.

The 300 SRT8 (it's missing the C applied to the last-generation sedan--but there is a 300C yet to come) also wears a new grille, new fascias, and black chrome wheels, with a flat-bottomed steering wheel, carbon-fiber trim and SRT logos dressing up the cabin.

Seven-spoke, 20-inch wheels and Brembo brake calipers polish off the package, along with a performance layer applied to the 300's touchscreen-driven infotainment center. The new view lets you measure acceleration and grip figures while you're taking the SRT8 for a spin, figuratively or worse. A Harmon Kardon sound system is an option, as is a Garmin navigation system.

The kicker: buy an SRT-badged vehicle and you'll get a day's worth of instruction at one of the Richard Petty Racing Schools across the country, to help you spend more time shiny-side-up.

Pricing hasn't been announced. Stay with High Gear Media for more on the newest HEMI sedan as we report live from the New York Auto Show.