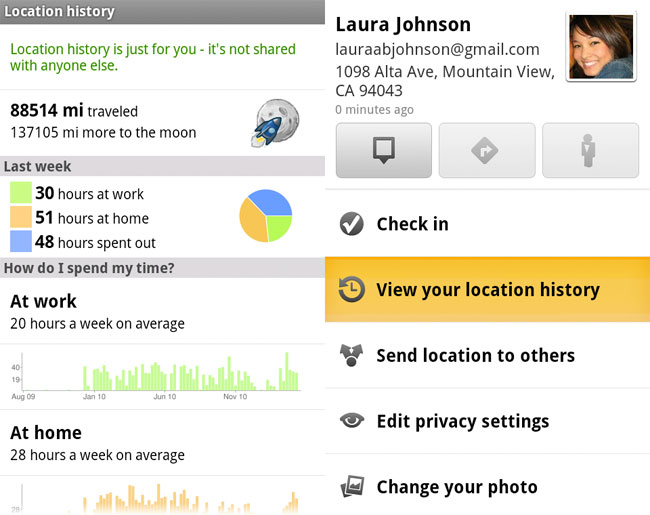 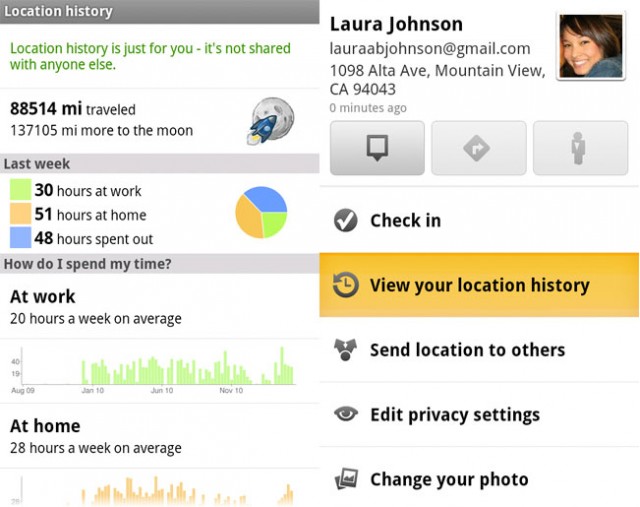 If you own an Android smartphone -- as an increasing number of you do -- you might've linked your Google Maps account to Google Latitude. Doing so allows data-hungry types to track their check-ins and travel history, and to see at a glance how much time they've spent at home, at work, and elsewhere. Previously, you've needed to login to Latitude on your laptop to see that data, but this week's release of Google Maps 5.3 for Android allows you to access that same information directly on your phone via a nifty new Latitude dashboard -- and it also offers a new, slightly creepy check-in feature.

The Android interface for Latitude (see above) looks great, and it provides a great deal of detail about your personal travel (or non-travel) habits. Best of all, it's private, so no one -- not even friends who regularly see your check-ins on Latitude -- can see it. However, if for some reason you want to share that information, you can do so in just a few clicks.

The new version of Latitude also adds the ability to check-in at home. That's a feature we haven't seen on many geolocation services -- and perhaps there's a good reason for that.

On the one hand, there are perfectly legitimate reasons you might want to tell the world you're at home. As engineer Kenneth Leftin says on the Google blog: "I love letting friends and family know when I’m at a cafe or park, but sometimes I want them to know that I’m relaxing at home or made it back safely from a road trip." Makes sense.

On the other hand, there might be a good reason that other geo-apps don't have this feature: namely, it's a little creepy. Yes, Google has instituted numerous privacy layers to protect your check-ins from prying eyes -- in fact, Google has probably done more to shield your locations than any other developer we've seen, including Foursquare, Gowalla, and especially Facebook. But unless you're trying to provide an alibi for a crime that's going down, or prove to a jealous significant other that you're staying in while he or she is away, checking in at home seems, well, weird.

Then again, when geolocation apps first launched, the idea of checking in anywhere was a bit weird, and now, it's second-nature for some, so maybe our opinions will change. For now, though, folks will have to be content knowing when we're eating at terrible restaurants or playing quarters at the local pub. Surely that's enough info for friends and stalkers alike.