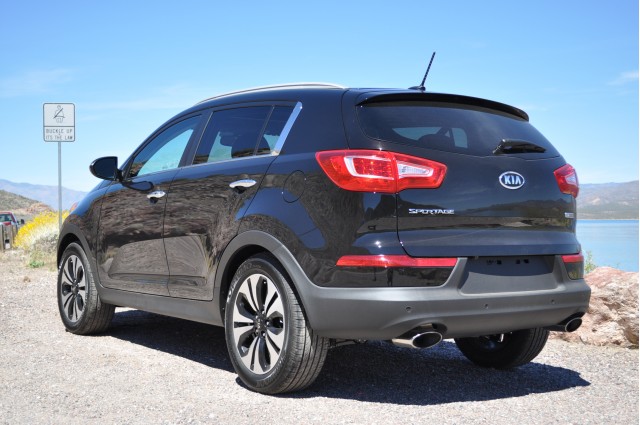 When we first drove the 2011 Kia Sportage EX we said that it's one of the most svelte crossovers on the market. After being on sale for over a year there is no question that the statement is as true today as it was then. Though you can only get so far on your good looks.

Upon taking a closer look we found quite a few things to quibble about when it came to the whole package. For 2011 Kia is adding a turbocharged SX model to the Sportage line, which among other things gives you some added grunt.

Last week we spent a day driving the new 2011 Sportage SX through the canyons outside Phoenix to see if the new power and tuning has fixed our previous quibbles.

The devil's in the details

There's nothing that ostentatious about the turbocharged SX; most people who aren't acquainted with the finer details might think it to be any other Sportage. The biggest giveaway is the dual-exhaust hanging out back, but there are other minor details. The wheels are unique 18-inch machine-faced alloys with black-painted accents; there are new special side moldings; and the grille features a black gloss finish instead of the normal chrome. The final giveaway is of course the SX and T-GDI badges out back on the tailgate.

Inside the main addition is what Kia calls a supervision meter cluster, which displays trip computer information with a brighter, better-designed layout than what the other Sportage models get. This is the same LCD display in the center of the speedometer that you will find in a non-SX Optima or Sorento.

Two of our major gripes in driving the Sportage EX were the dull steering and the harsh ride. We are happy to report that progress has been made on both fronts.  The steering is definitely more linear and communicates better than an earlier model we'd driven. While that's progress, the steering is still quite heavy on center and ridiculously over boosted in parkings lots. We asked an engineer about the lightness at parking lot speeds. The response we received was basically that Kia felt its customers want to exert no effort when steering at parking lot speeds.

Ride quality in the SX all-wheel-drive model we were in was definitely improved when compared to the EX model we drove in the past. The overall ride was more controlled at speed on the highway, and the front end doesn't give out as quickly when pushed hard into a corner. But the suspension still has no ability to soak up pot holes or bumps. We pulled into a nice photo spot off the highway and nearly thought a wheel was ripped off when we hit a pot hole. Thankfully no damage was done, but this was less than confidence inspiring.

When the 2011 Sportage launched there was one thing clearly missing, a V-6 engine option. The SX brings a 2.0-liter twin-scroll turbo direct injection four-cylinder engine to the table. This powertrain is rated at a very V-6 like 256-horsepower and 264 lb-ft with a nice flat torque curve due to the twin-scroll turbo. Combine this engine with the six-speed automatic transmission and the EPA says that you will see 22 mpg in the city and 27 mpg on the highway. Add all-wheel-drive for $1,500 and you lose 1 mpg in the city and 2 mpg on the highway ratings. We saw an average of 24.5 mpg in an all-wheel-drive model during mostly highway driving--though admittedly we had a somewhat heavy foot.

The power comes on strong due to that twin-scroll turbo, with max torque hitting you at a mere 1,850 rpm. That torque curve is flat all the way to 3,000 where the engine begins to lose steam. Above 4,000 rpm the engine just makes a lot of noise without a lot of go behind it. Though at no point in driving the Sportage SX did we miss not having a V-6 engine option.

Better but not class-leading

Overall the Sportage SX is Kia's alternative to the V-6 competition. We can't fault you for being drawn to the great looking CUV. Priced at $25,795 for a front-wheel drive SX model and $1,500 more for all-wheel drive, the Sportage SX is also quite a value. And now that the Sportage line-up has an engine option that can be compared to the competitions V-6 models, there is even more to love. But there is still the suspension tuning issue that some consumers will just not be able to over look. We'll be interested to see if the style and value continue to drive sales of this head turning CUV.