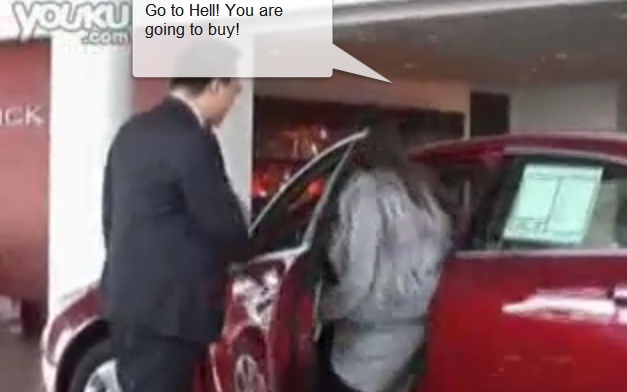 Driving through a dealership, apparently threatening to steal, then run over, the man you're dating to convince him to buy you a new Buick Regal is daring. It also works, apparently. At least it does on this man, in a Shanghai Buick dealership.

The drama unfolds, with English captions, as the young lady berates the man, complete with evil lightning from her eyes (though that may be CGI), before she hops in the car, revs the engine, and starts driving the car back and forth through the showroom. The low speeds and language barrier take some of the edge off of what was surely a tense situation for the participants.

Good news for Buick, though, as they are not only doing well with the younger set in China, they're apparenty drawing buyers with excellent credit--at the end of the video, the man assents, offering to put the car on his gold card.