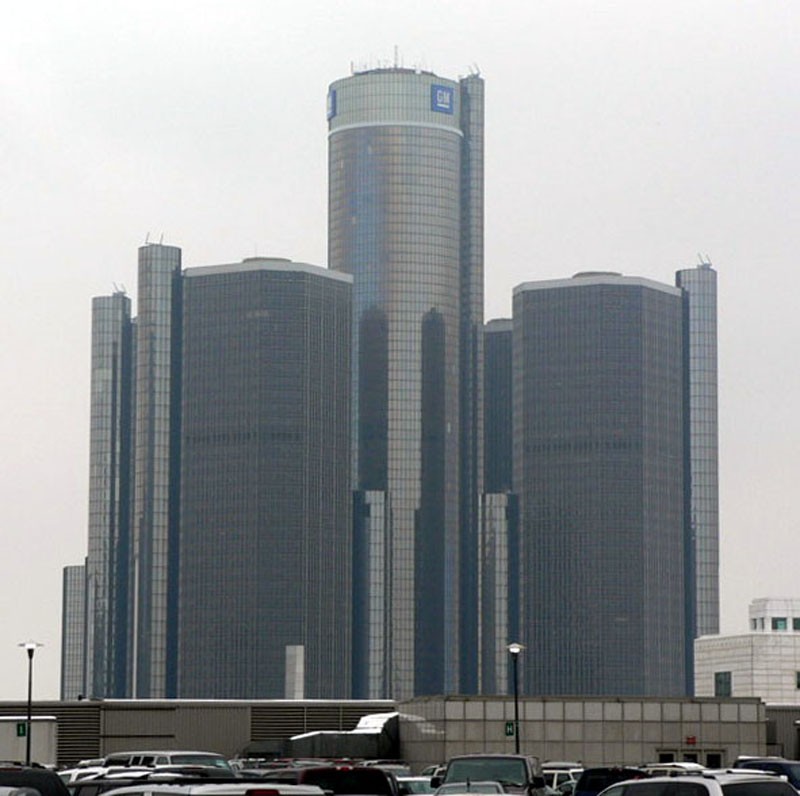 GM's Renaissance Center headquarters - the brain trust of the company, and a virtual factory for sculpture, painting, goldsmithing and playwriting. No, wait, that's the other Renaissance center, Florence.

Detroit and New Orleans both have epic problems, but Detroit is not the "new" New Orleans, no matter how you divine the numbers from the latest Federal Census.

According to the last Census, the city of Detroit is hitting a new nadir, worse than the dives it took in the early 1980s. Detroit lost a crushing quarter-million people in the last decade, while Sun Belt cities like Las Vegas and Atlanta boomed. In the city limits, the population has sunk to 713,000 people, from nearly 2 million in the 1950s, and nearly a million in the 2000 census. By the numbers, the city lost an average of 65 people a day, over the past ten years--shrinking it back to a size it hasn't seen since 1910, before the auto industry boomed.

The Detroit suburbs are growing, but the city itself is now only twice as large as New Orleans. Both are disaster zones of a kind: Detroit's become the auto industry's painful appendix, while New Orleans has replaced its port for the most part with hordes of tourists, but still has crushing poverty and crime and huge swaths of land left empty by Hurricane Katrina.

They're both withered and pretty much defenseless--but does that mean Detroit is the new New Orleans? Does it deserve some kind of federal intervention? Here's what our colleague, Jalopnik editor @RayWert says:

Maybe it's half in jest--or just irresponsible political chum to stir the Web-traffic pot. Either way, it's a demeaning suggestion--a borderline idiotic one--to say Detroit's homemade problems rank anywhere near those of New Orleans.

It's obvious that you only get FEMA assistance for a natural disaster like a hurricane, or a telethon when you're a programming disaster, like PBS. And yet Detroit got cash anyway. The city and its suburbs--via automakers and by extensions, suppliers, employees, and dependents--received billions in bailout loans in 2009 that probably prevented the city's head count from falling twice as far. That doesn't even begin to account for the ongoing subsidies Detroit gets indirectly from federal programs for investing in green-car technology and in sub-federal money that keeps factories alive when they probably weren't viable on their own account.

The second point's much worse. "America doesn't care about Detroit people" is political plutonium. On the surface, it sounds just like the accusations made against George Bush after Katrina, that he didn't care about black people. Ex-politicos know exactly what they're saying when they flip out this particularly noxious race card.

Here's what I know from living in both cities. In New Orleans, geography drives everything. Only about 5 percent of the city can ever feel safe from flooding, and that constant threat is what governs, not the mayor, not the governor. The city council can make grand plans to reinvent its riverfront or to turn a blown-out hotel into a jazz music piazza--but only in the shadow of the next big storm. Politics kills good ideas everywhere, but the threat of another Katrina is pretty effective civic birth control in the first place.

In Detroit, politics runs everything off the rails without help from nature. Between the unions, and an overbearing, overburdened city government, there's almost no breathing room for any renaissance. The only new thing growing on land in downtown Detroit is actually growing organically--farming. The city's literally being turned over into fresh earth.

These places may be converging on the same spot on the geopolitical map, but it's pointless and whiny for Michigan to look at Louisiana's natural tragedy and find envy in it.

New Orleans has levees. Detroit has denial. They're both Achilles' heels, but one doesn't have to be.