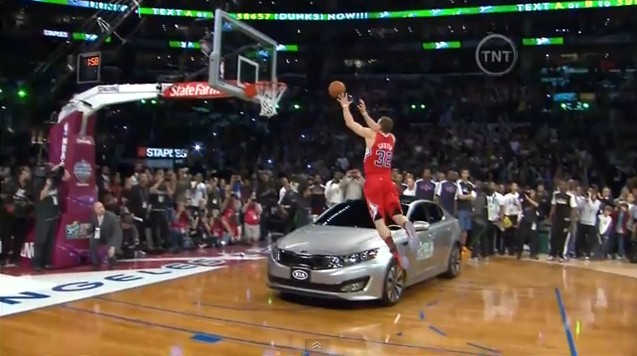 When you think guerrilla marketing in the auto industry your thoughts most likely turn to MINI. Recently Kia decided to push its way into that segment by providing a 2011 Optima for NBA Clippers player Blake Griffin to jump over in a dunk contest.

The Optima was arranged so that the hood of the car was in front of the basket. Baron Davis sat inside the car and tossed Blake Griffin the ball through the sunroof as Blake was in the air. For even more effect there was a choir on the court singing "I believe I can fly" by R. Kelly.

Blake Griffin's dunk ended up winning him the 2011 NBA Dunk Contest. But is that what fans focused on? Or is the real story that Blake Griffin jumped over a Kia Optima's hood for a slam dunk? Either way you look at it Kia put itself out there in a new and unique way. We give them props for that as it really needs to get out there with its new and improved line-up.

What do you remember most about that moment? Was it Blake Griffin winning the dunk contest or the fact that he jumped over the hood of a Kia Optima? Watch the video and let us know in the comments.