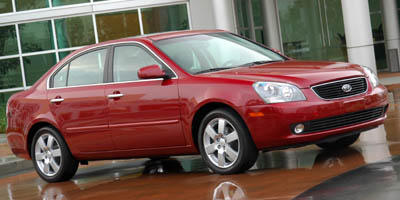 Hot on the heels of the 2011 Kia Optima's five-star safety rating from the Insurance Institute for Highway Safety, the company has announced a recall of 70,115 Kia Optima sedans from the 2006, 2007, and 2008 model years. At issue is an improperly installed shift cable, which could cause an accident in certain situations.

According to a bulletin from the National Highway Traffic Safety Administration, the shift cable in some Optimas with automatic transmissions may have an excess of tension. In certain instances, that could cause the cable to separate from the shifter assembly.

The danger in that situation doesn't come from driving, but from parking: if the cable detaches, a driver will be able to move the shift lever into "park", but the transmission will remain in the last gear used. If the car is in a hilly area and the driver doesn't deploy the handbrake, the car could roll, causing damage to the car, the driver, exiting passengers, or anything else in the vehicle's path.

The affected models were manufactured between September 29, 2005 and June 13, 2007. If you own one of these Optimas, you should receive a notice from Kia before the end of this month. Dealers will inspect all recalled vehicles, and if the shift cable is improperly installed, they'll replace it free of charge.