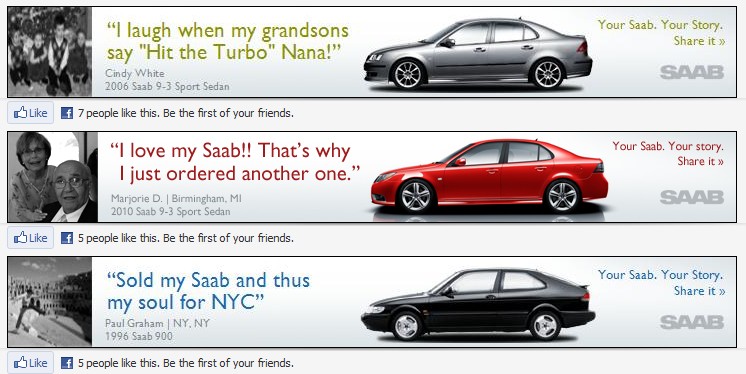 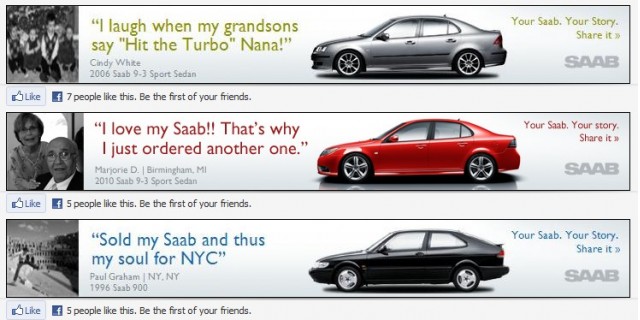 Nobody loves banner ads. They're often garish to the point of being offensive, and they take up space that could otherwise be used for news, reviews, syllogisms, or whatever the kids are into these days. Worst of all: they're not very effective for advertisers.

But Saab hopes to change all that: the little brand that could just launched a competition on Facebook in which fans design their own banner ads for Saab. Winners will have their ads run as part of the company's national advertising campaign, "The Story of Saab". And really, what more could anyone want?

Want to give it a go? Just visit Saab's Facebook page, then, after "liking" the brand, click the "Create Banner" link on the left-hand side. Approve the slightly intrusive app (the one that allows Saab to post things to your wall), and the banner-making process begins. All you have to do is (a) identify the Saab you like/own/want to own, (b) create two short lines of ad copy, and (c) verify contact details, just in case you win.

Unfortunately, you don't have much creative control over the ad -- it's going to be a gray-gradient box with a Saab front and center, no matter how you slice it. The winner will likely be the entrant with the most clever copy. (Though since your Facebook profile pic is embedded in the ad, contestants might be able to use that to some advantage.)

Saab says that this is a "first of its kind social media program", and perhaps that's true -- at least as far as banner ads go -- but having fans create ads is nothing new. Given Saab's pleasantly quirky sensibilities and its devout fan base, we might've hoped for something a little more unusual.

Unfortunately, from where we sit, the contest makes it look like Saab fired its ad agency (McCann, FYI) and is now relying on customers to spread the word. Which is exactly what a company in Saab's position should avoid right now, since there are rumors afoot that Saab may be bankrupt within five days. Not a banner day at all.

Select consumer-generated web banners to be used for national campaign

ROYAL OAK, Mich., March 10, 2011 /PRNewswire/ -- Saab Cars North America has debuted a social media effort within Facebook designed to tap into the passion and enthusiasm that Saab fans and owners, present and past, feel for the brand.

Through Saab's Facebook page, fans can write and star in their own Saab web banners using a template that mirrors the look and feel of "The Story of Saab" online and print creative, post to their Facebook wall and share with friends. Saab will choose a selection of the consumer-generated banners to run on an array of websites that could include AOL, MSN, the websites of The New York Times and Wired, among others, in late March.

The first of its kind social media program is an extension of "The Story of Saab," a multi-media, multi-faceted national advertising campaign, which debuted in the U.S. in late January.

"Saab has an incredibly loyal owner and fan base. Over the past year we have heard from fans all over the world and they are so passionate about the cars they love. Who better to tell the Story of Saab than the people who make it what it is," said Nicole Jankowski, Saab Cars North America's Marketing Communications Manager.

Purchased by entrepreneur Victor Muller, CEO Spyker Cars N.V. in 2010, Saab is working to regain its place as an independent and viable automaker in the minds of potential consumers in the U.S.

"Saab fans are a very devoted and passionate group," said Jennifer Swantek, Vice President, Account Director, McCann Worldgroup Team Saab.  "As we were working to relaunch the brand, we knew it would be important to find ways to leverage Saab's loyal fan base. People want to share their passion for the Saab brand.  They just needed an outlet. Now, through Facebook, we can give our enthusiasts that voice."

"The Story of Saab" was created by McCann Worldgroup Detroit's Team Saab for the U.S. market.  Team Saab also has the responsibility of creating the global launch campaign for the company's next product, the 9-4X. Team Saab also partnered with iWerk, a Royal Oak, Michigan based software development company, to create the Facebook technology.