Gas prices are rising, and we're all already feeling it at the pump. Political instability abroad and economic instability at home seem to be conspiring to suck our wallets dry as fast as our gas tanks. But now some enterprising thieves are hurrying the process along, drilling into the tanks of parked cars to steal their refined payload.

The area around Fort Mill, SC, just southwest of Charlotte, North Carolina, is apparently feeling the pinch at the pump more acutely than elsewhere. Five incidents of drill-wielding gas theft have come out of South Carolina's York County, according to the local Sheriff's Office. 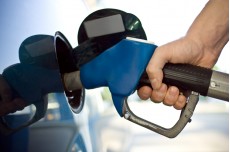 Drills in hand, the thieves pounce at night, stealing the gas, leaving the tanks in need of repair. Some of the owners of the cars vandalized thus far hadn't realized the full scope of the matter until the car was at the repair shop--likely after discovery by the mechanic.

The thefts have so far been localized to five streets in the Baxter Village and Bailiwyck areas of Fort Mill. If you're in those areas, you might want to boost security on your car in a visible manner to deter the thieves and avoid a costly repair--and another fill-up.