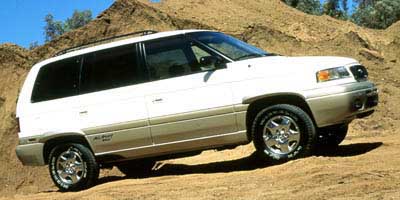 The United States Supreme Court today ruled that the family of a woman killed in an accident in 2002 would be allowed to proceed with its suit against Mazda despite Mazda's compliance with National Highway Traffic Safety Administration regulations on rear-seat safety belts. The federal ruling, arising out of an appeal from a California appeals court decision that the suit was pre-empted by federal law, opens a door to a potential flood of lawsuits at the state level.

The backstory
The accident that sparked the lawsuit happened in August, 2002, in Kane County, Utah. A 1993 Mazda MPV minivan struck a Jeep Wrangler that had come loose from the RV that was towing it.

Both front-seat passengers in the MPV, restrained by shoulder belts, survived, but the rear-seat passenger, Thanh Williamson, was killed. The Williamson family is suing Mazda, arguing that three-point harnesses should have been installed in the van, even though the lap-only belt it came with was within federal requirements.

In fact, the law requiring three-point shoulder belts in all front-facing seats didn't come into effect until the 2007 model year--14 years after the van was manufactured, and five years after the fatal accident.

A complex system of laws
The network of regulations that govern the construction and sale of automobiles in the United States is among the most complex in the world. The cost of compliance with these regulations is so high that many carmakers, including even the biggest names in the business, simply don't bring certain cars to the U.S. because they wouldn't be able to recoup their investment.

So how can a car that is in compliance with these regulations be subject to a suit arguing they should have gone above and beyond the legally required minimum? The answer lies in the relationship between federal regulations and state tort law: states may make their own laws and common law standards, but when in conflict with federal laws, they are pre-empted.

Williamson was seated in an aisle seat. But the majority decision finds there's no conflict with stricter California common law, as the intent behind FMVSS 208 was to set out only a minimum standard, not a pre-emptive requirement. State laws could co-exist with the regulation so long as they met or exceeded the federal minimum--not unlike the California Air Resources Board's stricter emissions standards relative to EPA minimum guidelines.

This interpretation of the seat belt regulation changes the light in which similar state tort suits will be viewed. State courts had previously ruled unanimously that federal laws like FMVSS 208 pre-empted state suits over seat belt design. That means many state suits previously thrown out of court could be viable once again, exposing the auto industry not only to huge potential liabilities, but to the cost of litigating the suits beyond the preliminary stages even if liability isn't proven.

Mazda not yet found liable
That last element is important in the case of Mazda and the Williamsons as well: the Court did not rule on whether Mazda is liable for Thanh Williamson's death. It merely ruled that the lawsuit could proceed in state court.

Mazda, for its part, said it was "disappointed" with the decision, and that it "will vigorously defend the vehicle when it heads back to trial court." The Williamson family claims in its lawsuit that it was the seatbelt that caused the "severe abdominal injuries and internal bleeding" that killed Thanh Williamson. The case will now return to state court to be tried on the matter of whether Mazda's construction of the MPV is at fault in Williamson's death.