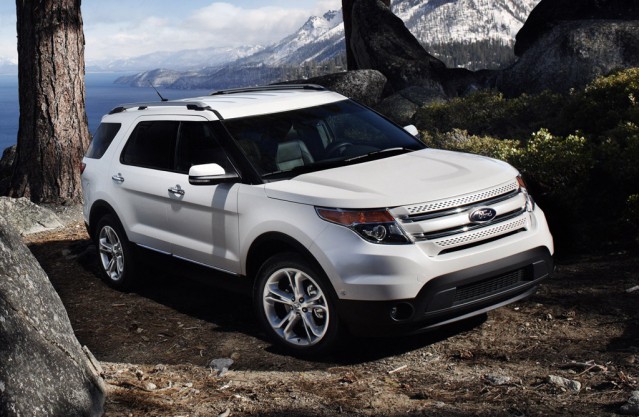 Ready for some adventure? Ford certainly hopes so. Building on the social media success of its Fiesta Movement, Ford has launched the "Go. Do. Adventures" contest to promote the 2011 Ford Explorer. Just tell Ford about your dream adventure vacation, and if you're lucky, Scott Monty & Co. will foot the bill.

To enter the contest, all you have to do is answer this question: "If you could have a 2011 Explorer for a week in the U.S. with your family, where would you go and what would you do?" Then, submit your response to Ford via the Explorer Facebook page. Your entry can be in video or essay format, so don't feel like you need to have video editing skills to be a contender.

Entries will be judged on the basis of creativity (i.e. how unique your adventure is), feasibility (i.e. whether it's doable), and "consumer appeal" (i.e. whether folks who see video of your adventure will be inclined to purchase an Explorer). That last part is particularly important, since Ford will be sharing videos of each trip -- as well as videos from non-winners -- on its numerous social media channels.

Technically, the "Go. Do. Adventures" contest ends on November 15, 2011, but according to the rules:

Translation: get cracking. Also, contestants should probably avoid dreaming too big, since Ford has set a cap of $40,000 for all trips. So if Ford funds a full ten adventures, each will be limited to an average of $4,000, and once you factor in airfare and lodging for a week with the family...well, let's just say that scaling Mount Everest in an Explorer probably isn't going to make the cut.

Relying so heavily on social media to push the Explorer is an interesting move on Ford's part. True, the company's Fiesta Movement campaign was very successful, but the Fiesta's target Generation Y demographic is a good bit younger than the Gen X and Boomer families likely to pony up for the pricier Explorer.

On the other hand, Ford's Facebook launch of the Explorer was hugely popular, and the older set is hopping on the social media bandwagon faster than almost any other demographic, with 47% of people over 50 now using social media. In other words, the "Go. Do. Adventures" contest could pay off in a big way. And hey: if it tanks, Ford's only out $40,000 -- or one well-equipped Ford Expedition.

For more info, check the Ford Explorer Facebook page, or read the official press release below.

Ford Explorer ‘Go. Do. Adventures’ Campaign Takes the Conversation on the Road, Continues the Momentum

CHICAGO, Feb. 9, 2011 – If you had a Ford Explorer for a week, what would you do and where would you go? This question lays the groundwork for thenew “Go. Do. Adventures” program that invites consumers to suggest how they would use an Explorer to create their own unique adventure.

“We want people to get out there and experience their environment with friends and family in a fresh new way, and the new Explorer is the best vehicle to do it in,” said Jim Farley, Ford group vice president, Global Marketing, Sales and Service. “Ford has reinvented the Explorer, and with this new campaign we’re inviting consumers to be just as inventive by coming up with their ultimate adventure.”

Consumers can submit stories in the form of essays, photos and videos through several websites, such as www.ford.com/explorer and Facebook. The responses will showcase both key product features and unique American locations and attractions. Those people whose ideas are selected will then be able to live out their dream adventure, courtesy of the all-new Explorer. All of the action will be captured and documented through the Explorer Facebook page.

“This provides a platform for a larger audience to experience Explorer. We started the conversation by revealing Explorer on Facebook and are continuing to advance that dialogue online,” said Eric Peterson, Explorer communications manager. “We have actively answered our fans’ questions, but now we have an opportunity to create advocates and show how Explorer can enable you to do the things you always dreamed of.”

Additionally, through collaboration with Outside Media and its network of unique assets and experts, Ford will select the most compelling stories to film, and produce short films to be distributed online and through traditional media. Ultimately, the content will be developed into a one-hour TV special.

Building on success
The current marketing campaign for the reinvented 2011 Explorer, Go. Do., is an example of how a consumer-oriented approach can influence advertising creative and generate online discussion. It began with the Ford Explorer Facebook engagement that showed the all-new SUV’s live Facebook reveal on July 26.

The Go. Do. campaign continued evolving through Facebook as Ford engaged fans and prospective Explorer customers in one-on-one conversations using texts, videos and images. This led to significant Facebook growth – more than 138,000 fans and growing – and increased anticipation for the new Explorer. Explorer fans also can get real-time answers from Ford experts as well as view video responses from engineers and celebrities such as Bret Michaels and Snoop Dogg.

The unfiltered feedback influenced more traditional aspects of the campaign, including TV and print advertising. The result is an unscripted, organic look at American families and the American road trip, with a mini-documentary feel to TV spots.

To see more of the creative work and how the reinvented Ford Explorer is changing the way consumers think about SUVs, log on to www.ford.com/explorer or www.facebook.com/fordexplorer.