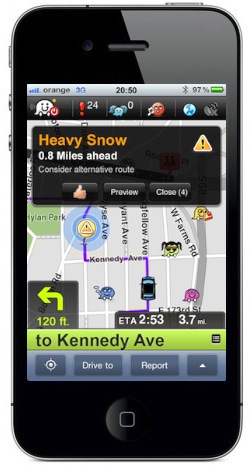 We've spilled a good bit of ink on Waze, the smartphone app that makes commuting more comfortable (and occasionally, entertaining). Using elements like crowdsourced mapping and real-world prizes, Waze has built a following of more than 2,000,000 users, but the company isn't resting on its laurels. Waze continues to add new features, including the latest one, which quickly lets you alert your fellow Wazers about driving hazards like accidents and severe weather.

Waze already collects traffic data passively: if the app senses that users are driving slowly, it'll make a notation on travel maps. It also allows drivers who've pulled over to enter information about accidents, roadblocks, and such by hand. This new feature, however, lets users annotate maps on the go with a new voice recorder.

The way it works is pretty simple: when Waze users see something that poses a driving hazard -- say, an accumulation of snow or a fender-bender that's blocking traffic -- they can spread the word to other users by simply speaking their alert to the app. Waze then routes that notification to the handsets of nearby drivers.

At the moment, this updated feature is available only on the iPhone version of the app, though according to Waze, it should soon be available for Android, Blackberry, Windows, and Symbian phones. If you'd like to learn more, have a look at this video demonstration or scan the official press release pasted below.

(Palo Alto, Ca.) February 8 -- Waze, developer of the world's first social navigation app, today announced the launch of the first voice-based hazard reporting feature for GPS commuters and travelers worldwide. With this added functionality, waze is further empowering its iPhone community to help each other stay alert and get to their destinations safely.

The new feature set allows users to report a wide range of road hazards, weather conditions, and potentially dangerous obstacles with minimal interaction with the app. Once a hazard is spotted, users can record a brief voice-description and share it with others in their area. Those en route towards the hazard will be warned by their fellow wazer’s voice-alert beforehand and be potentially rerouted to avoid any danger. In this manner, waze encourages drivers to “pay it forward” and help others stay alert to road conditions.

Real-time user-voice reporting of hazards including:

According to the most recent U.S. Census statistical abstract, there were close to ten million car accidents in 2008. In New York State, 2009 yielded over 58,000 accidents related to environmental factors alone, according the DMV. In 2011, waze believes people can reduce these statistics by working together to create a dynamic, community-operated alert system to help make roads safer for everyone.

“Everyday, drivers are faced with any number of dangers on the road including ice, accidents, and flooding for example. The unpredictable nature of these hazards and lack of immediate road data leaves drivers vulnerable to the conditions ahead,” said Noam Bardin, CEO of waze. “The only way this information can be collected and distributed in real-time is by the initiative of group-minded individuals and a means to warn their fellow drivers.”

Updates to the Android, Symbian, Blackberry, and WinMo editions will be announced soon.

Waze is available in the Apple AppStore and Android Market Place and can be downloaded from the waze web site for Symbian and Windows Mobile devices. To learn more about waze, visit www.waze.com or @waze on Twitter.