Nielsen: With Gas Prices On The Rise, Consumers Are Driving And Spending Smarter 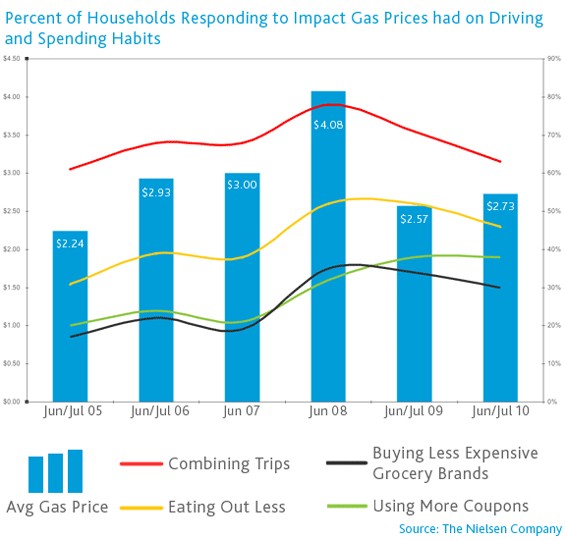 In the summer of 2008, banks were sinking, gas prices were soaring, and the recession was looming. Two-and-a-half years later, the banks have recovered (mostly), the recession is over (mostly), but gas prices have inched back toward record territory.

After a steep price drop in the autumn of 2008 -- from $4.11 per gallon to $1.61 per gallon -- gas prices have been steadily on the rise. Given today's average of $3.05 per gallon, research powerhouse Nielsen's annual survey about lifestyles and fuel prices demonstrates some interesting trends among consumers.

In the survey, Nielsen asked Americans about four habits: eating out, brand-consciousness (at the grocery store), coupon usage, and running errands. Here's what the researchers found:

Nielsen didn't ask about car-buying habits on this particular survey, but we imagine that more consumers will consider smaller and/or more fuel efficient vehicles as gas prices increase. (Remember, SUV sales plummeted in 2008 and bounced back almost as soon as prices dropped below $2 per gallon.) So, maybe all those compact rides we've seen at the 2011 Detroit Auto Show have a future.