Ram Holds A Battle Of The Bands--Just Like High School, Only Not 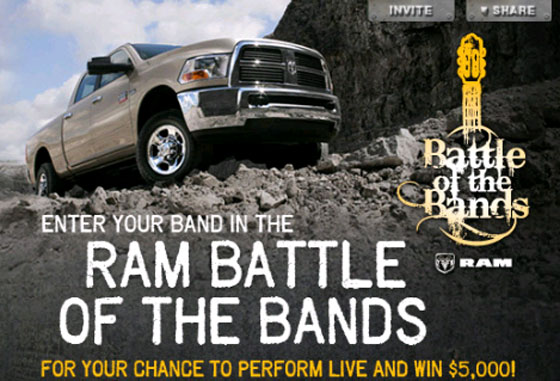 Ram Battle of the Bands

Remember in high school when there was the battle of the bands each year? We know you never really participated but hey, it was fun watching, right? Well now Ram wants you to relive those awkward teenage years and is holding its own battle of the bands contest over social media.

The contest is simple in nature, submit a video of your band through Ram's Facebook fan page. Fans will then vote on whichever bands they are most impressed with. The top ten bands will be narrowed to just two by the Ram Truck judges (who are not named).

The final two bands will both play live at the Rodeo Austin event, though details have not yet been released. Oh, and there is real money involved: First prize takes home $5,000 while second takes $2,500.

So get your half-baked country band together and grab a flip cam. The contest ends on February 13, 2011.