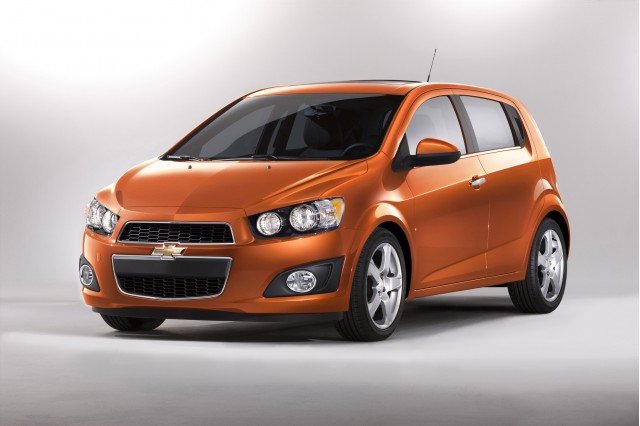 This fall, Chevy waves goodbye to the little-loved Aveo sedan and hatchback. But will the 2012 Chevrolet Sonic--the Aveo's replacement--be the right subcompact to pitch against car shoppers already infatuated with the Honda Fit and Ford Fiesta?

The Sonic is a small four-door sedan or five-door hatchback, but it marks a big departure from the sleek contours of the next-bigger Chevrolet, the 2011 Cruze, even from those of the Aveo. With its pinched grille and sculpted taillamps, the Sonic sports some nifty design details that might give it some styling leverage over the smart-looking Fiesta. The Sonic hatchback is the more exciting of the duo: its rear-door handles sit vertically in the C-pillar, and the reverse wedge of glass at the rear end gives the beefy, blocky hatch a distinct European feel, not unlike the smaller members of the Renault/Nissan family. Inside the shapes are familiar to Chevy Cruze shoppers, but there's an added flair of red plastic trim on some interiors, and a motorcycle-like LCD speedometer coupled with an analog tachometer.

The Sonic sits on a 99.4-inch wheelbase; the sedan is 173.1 inches long overall, while the hatchback is 159 inches long. Compared to the Cruze, the 2012 Sonic is two inches narrower, six inches shorter and 500 pounds lighter, as well as 11 inches shorter overall. Still, Chevy promises the best interior room in the class--even better room than the Fit, which is widely perceived as the space leader in the subcompact class. The Sonic sedan will have a 14-cubic-foot trunk; the hatchback, 19 cubic feet of cargo space behind the rear seat, with more than 30 cubic feet of space with the rear seat folded down nearly flat.

It's smaller than the Cruze, but the Sonic will share the larger sedan's powertrains, which could relieve the one of the biggest fears of subcompact buyers, sluggish performance. The base engine will be a 1.8-liter four-cylinder with an estimated 135 horsepower and 123 pound-feet of torque; the optional 1.4-liter turbocharged four-cylinder shares its 138-hp rating with the Cruze, as well as its 148 lb-ft of torque. A five-speed manual will be the base gearbox, with a five-speed automatic transmission offered--and with the six-speed manual of the Cruze on tap for turbo Sonics. Chevy hints a 40-mpg fuel economy rating is in the offing, which the Sonic will need--since even the larger Hyundai Elantra hits that high-water mark, and since Ford promises its Focus lineup will do the same.

Electronic power steering is standard. The Sonic's suspension design uses basic MacPherson struts in front and a compact torsion-beam design in back. Wheel-and-tire combinations will span a range from 15-inchers to 17-inchers.

GM says it expects the Sonic will hit all five-star safety targets. Ten airbags will be standard (including dual front, front and rear side, curtain, and knee airbags), along with anti-lock brakes, traction and stability control.

Interior and entertainment features will include available XM satellite radio; a USB port; and Bluetooth. Also on the options list will be remote start and heated front seats.

With standard OnStar hardware comes six months of standard turn-by-turn navigation, which allows GM's phone operators to send maps and directions to the car, which displays those directions as arrows on a small LCD panel. It's distinct from other navigation systems, in that there's no map storage in the car itself.

The 2012 Sonic has its work cut out for it. Not only are the Fit and Fiesta already established in the marketplace, Chevy will have to face a new Hyundai Accent and Kia Rio coming by 2012, as well as a U.S. version of the Nissan Micra. The GM brand also has to find a way to market the Sonic effectively below the Chevy Cruze sedan, while leaving itself some room to slot in the even smaller Spark hatchback, sometime in 2012.

A note about the name: Chevrolet says it's gone through all the legal rigors of ensuring the Sonic name is free and clear of intellectual-property rights. No car has carried the name, but a raft of media properties wear the badge: Seattle's Sonics basketball team, Sonic hamburgers, Sega's Sonic videogame characters, and maybe the closest concern to Chevy, the Sonic chain of automotive dealerships.

The 2012 Sonic goes into production this year at the Lake Orion Township, Michigan, plant that also builds the Cruze.