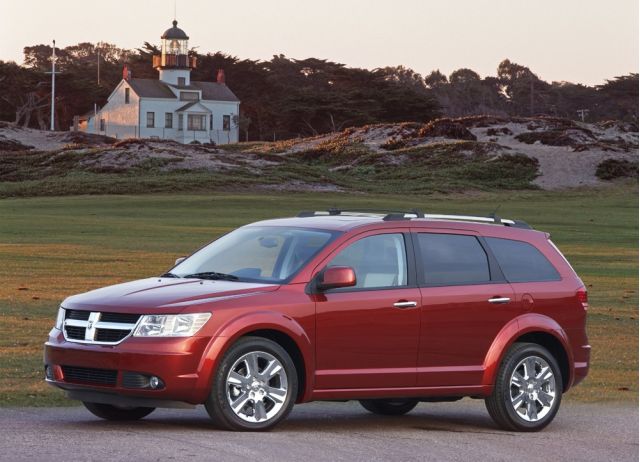 Chrysler has issued three separate recalls for four different vehicles: the Dodge Journey, the Ram 1500, and the Ram 4500 and 5500. At issue are a range of problems, including flaws related to suspension, steering, and electrical systems.

• Up first, the Journey -- specifically, 2009 Dodge Journeys manufactured between November 1, 2007 and September 7, 2008. According to a bulletin from the National Highway Traffic Safety Administration, those models may have been built with inferior wiring, which is prone to "fatigue and break". If that happens, it can cause a malfunction of the side-impact sensors; as a result, drivers may see an airbag warning light, and the Journey may also lose the ability to detect a side-impact crash. While the former is merely annoying, the second is potentially very dangerous, since it would prevent the deployment of side airbags in the event of an accident.

This recall currently affects 65,180 vehicles. Chrysler expects to begin fixes in Feburary 2011, at which time dealers will replace the units' wiring harnesses free of charge. If you have questions in the meantime, we encourage you to call your dealer, or give Chrysler a ring at 800-853-1403 and reference recall #K07. Alternately, you can call the NHTSA at 888-327-4236 and refer to campaign #10V658000.

• The second recall involves the 2011 Ram and affects 56,611 units manufactured between September and December 2010. The NHTSA notice indicates that the rear-axle bearing on these vehicles may seize, increasing the risk of a crash. Owners may hear a growling or grinding noise coming from the axle before the bearing fails.

Chrysler expects to begin this recall in February, too, and the faulty part(s) will be replaced free of charge. As before, we recommend that owners contact their dealers ASAP to check on the status of the recall, but you're also welcome to ring Chrysler at 800-853-1403 (no recall number as yet) or the NHTSA at 888-327-4236 (campaign #10V656000).

These three recalls follow close on the heels of recalls issued for the 2009 and 2009 Ram, which we mentioned just a couple of weeks ago. These problems aren't likely related to those, but the timing is still unfortunate. Then again, 2010 has been a banner year for recalls, so maybe Chrysler is just going with the flow. Here's hoping for safer -- and more recall-free -- 2011