Free Music For Fans Of The 2011 Jeep Wrangler -- But Is Chrysler Down With It? 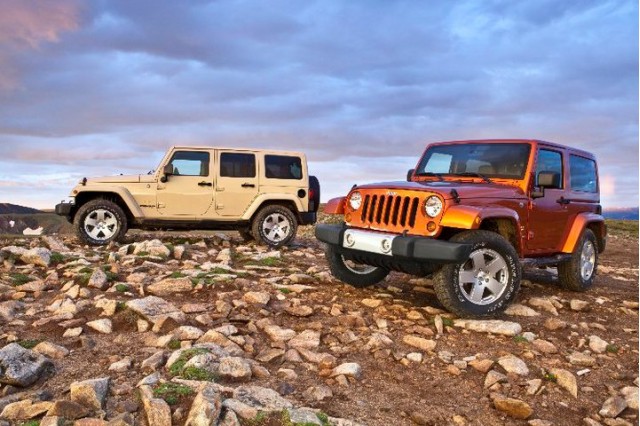 Jeep has been on a roll the past few months: the 2011 Grand Cherokee debuted to massive applause, and the 2011 Wrangler not only has its own blog, but it's also been featured in at least one hugely popular videogame. Now, Jeep is offering something special to its growing list of fans: a free tune to jam on while they're riding the trails.

Only thing is, we're not so sure that the new, free single from C.KhiD -- his capitalization, not ours -- is entirely sanctioned by Jeep. The press release entitled "2011 Jeep Wrangler Music, A New Song, Released Free for Jeepers" arrived with no contact info, no boilerplate, and it doesn't appear to have come from Jeep HQ (check it below). That means that it was probably sent by C. KhiD's publicist, which does nothing to answer the burning question, "Did Jeep okay this?"

Have a look at the video and offer your own opinion:

Yeah, we have a feeling that Mr. Marchionne didn't sign off on that.

But whatever: some people will like it, and if you're in that number, follow this link for the download. [Iffy filesharing site ahead; proceed at your own risk.] And if you happen to be a member of Chrysler's legal team, we wish you a happy New Year and the best of luck with all those cease-and-desist orders.

2011 Jeep Wrangler, Commander, and Grand Cherokee Riders have a new song to blast in new 2011 cars. If a driver has ever loved the Jeep Wrangler car model, C.KhiD's hot new Hip Hop song is a treat for car speakers. Launched today on-line, this top New Hip Hop Songs 2011 release, is 1 of 3 the new music artist, C.KhiD, is releasing as free new 2011 music.

2011 Jeep Wrangler, Commander, and Grand Cherokee Riders have a new song to blast in new 2011 cars. New music artist C.KhiD wrote a few hot new hip hop songs based off a favorite car brand, releasing the first of them this week. Free for all "Jeepers" and new music fans to download, C.khiD makes everyone drop their tops.

"I promoted on a tour through Florida in a 2010 Jeep Wrangler. After that, it was undoubtedly my favorite car of all-time. Jeep Wrangler Music is just celebrating that great car and the fun lifestyle it caters to. My first car was a Jeep Grand Cherokee and I love the Jeep Commander with moon roofs, but Jeep Wranglers are definitely IT! From Miami Beach to Myrtle Beach, it's my ride," spoke C.KhiD on his passion for Jeep Wranglers.

Shopping for a Jeep Wrangler currently, C.KhiD is an independent artist buzzing through iPods of high school, middle school, and college students. Fighting to become a top independent rap artist, the south carolina rapper has achieved much success thanks to viral internet videos. Closing in on 1 million views to his popular YouTube music video "Cash on Deck," the South Carolina rapper is paid by YouTube, iTunes, Myxer, and other media outlets.

"I hope Jeep car company picks up on me. Would love for them to get involved for a hip hop video. I try to keep a friendly image that's a medium between my generation and those older. This song deserves that 2011 Jeep Wrangler Call of Duty that Kobe Bryant Got," continued C.KhiD.

C.KhID is the founder of "CKHID", a digital age entertainment group. An acronym for "Cannot Kill How I'm Dreaming," the company focus is music culture, art, and fashion. One of the earliest Hip Hop bloggers, C.KhiD launched his first music blog in 2002. Today CKHID focuses currently on building himself as an artist, but also works to build careers for top quality acting and music artists found at the peak of today's social media posts.