CR: Visibility Quite Good In Small Cars, Appalling In Trucks 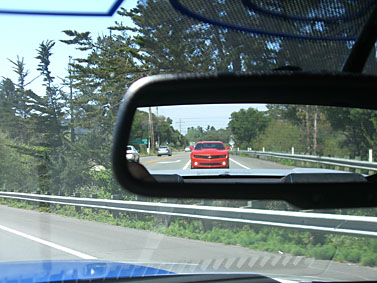 When you're out on a test-drive, it can be easy to get rather lost in the way the vehicle responds, the sound of the engine, the supple leather, or the trick features. But for your own safety and that of others, look around. Can you see well enough to be confident when backing up or changing lanes?

If you can't see what's around you when you're backing up, what if your kids or neighbor kids were playing in the driveway?

We've certainly wondered that when testing some new vehicles, especially high-shouldered crossovers, as well as some trucks, and that's what Consumer Reports has had in mind as they've been keeping tabs on visibility—and measuring it in a consistent way—since 2002, and last week the publication summed up its findings from a wide range of vehicles, in which it measured blind-zone distances for both a 5'-1" driver and 5'-8" driver.

Big trucks give you blinders

Note that all of these are small-car models. Shorter drivers tend to believe that getting a larger, taller vehicle will help them afford a better view out, but that's the wrong line of thinking. Small cars, as CR points out, have the shortest blind zones typically, while large pickups have the longest ones. And of course the higher window ledge, generally the larger the blind zone. In the case of large pickups, blind zones can span 40 feet.

While vehicles can at times vary in visibility from year to year, due not only to trim and equipment changes but also due to changing head restraint designs, most of these observations span several model years.

To test blind zones, CR has the driver look over his or her shoulder, out the back window, and reverse until they can no longer see the top of a 28-inch-tall traffic cone. The difference was shocking: smaller cars and roadsters were under ten feet in many cases (just three feet for the Miata), while some trucks and SUVs were many times that. With the third-row seat in place, a 5'-1" driver couldn't see the cone until they were 69 feet away.

These issues can be even more pronounced for shorter drivers, with a cavernous, almost claustrophobic feeling on some vehicles that can block or partially block huge swaths of outward vision.

As The Car Connection reported last week, the federal government plans to phase in new rules for rearview cameras beginning in 2012, with a mandate for September 2014.

Rear-view cameras are still often only included with navigation systems, with large in-dash screens, and cost $1,500 or more. CR points out that Honda, with its 2011 Odyssey, forces shoppers to step up to a top-trim model, at a $6,000 premium, in order to get the rear-view camera. However in-mirror rear-view monitors are becoming increasingly common. Full-size pickups also have relatively low rates of camera installation, and the feature is often hidden within top option packages.

CR has one other important point: Even if you do get a camera system, don't keep your eyes on it too much; look around, use it as an additional tool, and don't expect it to solve all the issues of a vehicle with poor visibility.

The best solution is to buy one with good outward visibility in the first place.