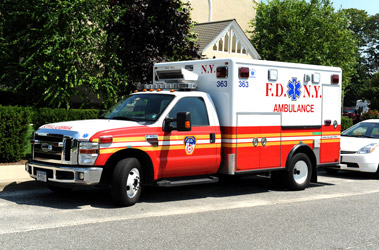 We all hope we're never involved in a serious car accident, but every day, some of us are. Those of us unfortunate enough to have an accident in New York City will soon face not only injury, the loss of our transportation, and the expense of medical treatment, but a bill from the city. Say what?

New York City is on the verge of adopting a "crash tax," to help cover the cost of sending first New York Fire Department (FDNY) responders to an accident scene. The fee schedule: $490 for a car accident or fire with injury; $415 for a no-injury fire; and $365 for a no-injury accident. As if it weren't expensive enough already on repair bills alone.

It's not a done deal yet, with public hearings scheduled for January, though Mayor Bloomberg doesn't need the City Council's approval to pass the bill. The crash tax is currently set to go into effect July 1, 2011, and could raise $1 million for the city.

The heartless move is already stirring up New Yorkers, but the FDNY says it's the sane thing to do, by placing the financial burden on those responsible for the accident--and their insurance. In theory, the "crash tax" will reduce the burden on the average taxpayer, though an actual tax break once the plan goes into effect doesn't appear to be part of the plan.

Another flaw in the design? All parties to an accident will be charged the fee, not just the party at fault.

Adding the insult of taxes to the injury of an accident--way to go, New York.