Study: Twitter Users Not As Engaged As Raw Numbers Suggest 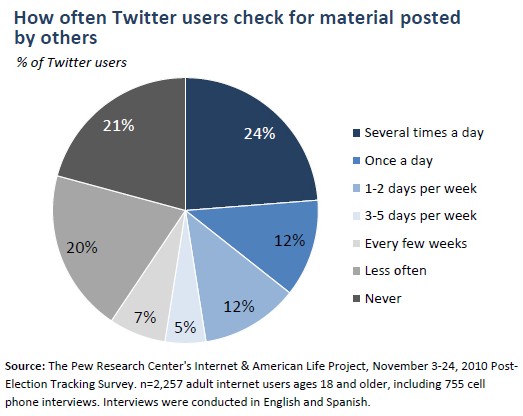 How often Twitter users check for material posted by others

We constantly hear about how popular Twitter is becoming, along with the growth that the site is experiencing. Not often enough do we sit down and actually crunch the numbers related to how the site is used.

In a recent survey performed by Pew Internet, it was found that Twitter is currently being used by eight percent of online adults in the United States. Of that eight percent, 24 percent check their tweets several times per day while 12 percent check once per day. Even more interesting is the finding that 21 percent of Twitter users never check Twitter. Meaning they simply signed up, but don't use the site.

The survey was conducted in November and reached about 2,250 people.

What this all boils down to is about two percent of online American adults check Twitter multiple times a day.