Video: New York City Wants To Remind You (And Your Children) That Speed Kills, Yo 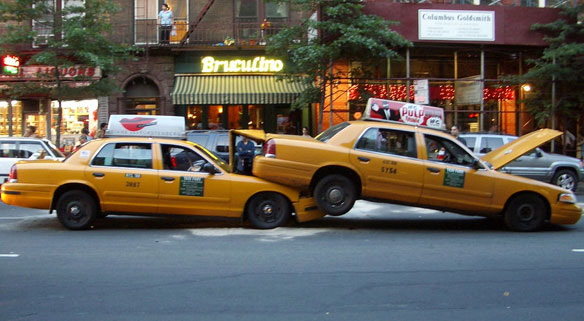 If you're a member of the National Motorists Association, we have some bad news: New York City is teaching young people about the dangers of speeding. Them's the breaks. (Or "brakes". Take your pick.)

On a recent fall day, New York City's Department of Transportation Commissioner, Janette Sadik-Khan, joined some of her governmental colleagues and several dozen fourth graders at the corner of Atlantic Avenue and Hoyt Street in Brooklyn. Judging from the city's press release (see below), it appears that the children (a) were taught to use a speed gun, then (b) used it to clock the speed of passing motorists.

The results shouldn't surprise anyone who's ever driven in New York (or sat in the backseat of a cab): most cars were cruising well over the posted 30 mph speed limit, with some topping 50 mph.

This field trip was part of a larger campaign to raise NYC residents' awareness of the dangers of speeding. The campaign is called "That's Why It's 30"; it's meant to remind New Yorkers that the speed limit on city streets is 30 mph and to halve the number of traffic fatalities in the city by 2030. (FYI: In 2009, New York saw its lowest number of traffic fatalities in 100 years, and Sadik-Khan wants to build on that success.)

The campaign has spawned a couple of clever commercials over the past few months. Here are a couple of them to warm up your chilly Tuesday:

Students record an average midday speed of 38 m.p.h despite the citywide 30 m.p.h. limit

New York City Department of Transportation (DOT) Commissioner Janette Sadik-Khan, City Council Transportation Committee Chair James Vacca and Councilmember Steve Levin today tracked vehicle speeds on Atlantic Avenue and Hoyt Street, joined by fourth-grade students from Brooklyn's P.S. 261 Philip Livingston School. The observations highlight the danger of speeding particularly to children and senior pedestrians, and they underscore the need for all motorists to follow New York City's 30 m.p.h speed limit. As part of a hands-on traffic-safety workshop led by DOT's Office of Education and Outreach, students recorded an average speed of 38 m.p.h. on Atlantic Avenue, with some vehicles moving as fast as 50 m.p.h., despite the posted 30 m.p.h. speed-limit and school-crossing signs in the area. Last year, the number of citywide traffic fatalities was the lowest in a century, and the agency is aggressively implementing strategies to reduce traffic fatalities 50% by 2030, including the launch of the anti-speeding advertising campaign "That's Why It's 30." The Commissioner and elected officials were joined at the event by the school's principal Zipporiah Mills and the students' teachers Colleen Greto and Megan Kane.

The pilot workshop, which will be made available to other schools, builds on the Pedestrian Safety Study & Action Plan, announced in August by Mayor Michael R. Bloomberg and Commissioner Sadik-Khan. In addition to the speed observations, students learned the science of safety by calculating the stopping distances for vehicles traveling 20, 30 and 40 m.p.h. The faster the speed, the longer the stopping distance, up to as much as 160 feet—nearly the length of an entire city block. On other exercises, the students tried to stop themselves while walking, jogging and sprinting, driving home the difficulty of stopping as you move faster. These activities echo the message of DOT's "That's Why It's 30" print, online, radio and TV ads, which emphasize that the speed limit is 30 for a reason: If a pedestrian is hit by a car traveling 40 m.p.h. or faster, there's a 70% chance that the pedestrian will be killed; at 30 m.p.h., there's an 80% chance that the pedestrian will live. The ads can be viewed at www.youtube.com/nycdot.

DOT's Office of Education and Outreach works with students, seniors and communities throughout the city to educate them about street safety. DOT has already undertaken unprecedented traffic-calming efforts through its Safe Routes to Schools and Safe Streets for Seniors campaigns, which target crash-prone schools and senior corridors citywide for safety upgrades ranging from improved crosswalks and signal timing to improved signs and markings.

The Pedestrian Safety Study & Action Plan includes installing 1,500 pedestrian countdown signals citywide, including at Atlantic Avenue from Grant Avenue to S. Oxford Street, and on Flatbush Avenue from Grand Army Plaza to the Manhattan Bridge in Brooklyn. The agency also will pilot a program to test the safety performance of neighborhood 20 m.p.h zones and re-engineer 60 miles of streets per year for greater pedestrian safety.