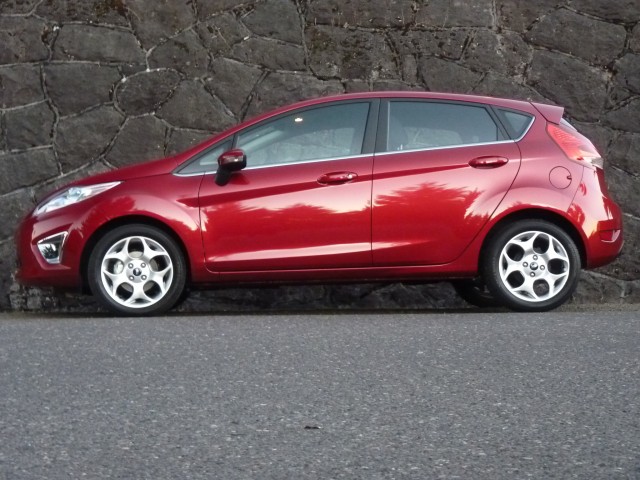 As you've probably heard by now, the small-car market has changed radically over the past few years: They've become better equipped, more fun to drive, and safer than they used to be.

But as we recently saw in a follow-up drive with the 2011 Ford Fiesta SES, sometimes those waves of small-car change feel only as deep as a features list.

First off, the Fiesta is every bit a small car. It doesn't work wonders with its interior, like the Honda Fit and that car's so-called Magic Seats. And its roofline and hatch openings are obviously the way they are more for styling than absolute functionality. Without folding the rear seats down, the hatch doesn't offer that much cargo space, and the cargo floor is higher than it would look to be from the outside. And thankfully (for this very tall driver), the front seats slide way back. Do so, though, and there's really no usable backseat space left.

The Fiesta hatchback looks great, though, with a design that's crisp, wedgy, and curvaceous. And inside, the instrument panel design feels very upscale. But the feel of the switchgear, and of the cabin materials, will remind you at times that you're in a budget-priced vehicle; we didn't like the vague feel of the buttons in the center stack, which control audio, windows, and locks, or the way the dark plastic buttons collected shiny fingerprint smudges, though the menu system accessed through the central controller makes quick logical sense and looks good.

With 120 horsepower and 109 pound-feet of torque, the little 1.6-liter four-cylinder engine doesn't sound that promising; with less than 2,600 pounds to move around it can feel quite energetic. Ford's Ti-VCT variable camshaft timing in theory helps it be a good deal more flexible than smaller fours of the past, as well. Unfortunately, if you seek MINI Cooper-like enjoyment and responsiveness, you won't find it with the dual-clutch automatic (opt for the manual and you might find it); we found the DCT, which returns impressive fuel economy ratings of up to 40 mpg highway, to be the weak link on our mission for driving fun, and it regularly exposes the engine's lack of scoot due to sluggish downshifts.

While the gearbox will ready the next gear up for engagement in the same way as other DCT units we've experienced in products like the Volkswagen GTI and Mitsubishi Lancer Ralliart, the Fiesta has more of a noteworthy pause, especially at the top of first and second gear. Even more frustrating is its hesitant downshifts; smack the accelerator down with a mission, and the transmission (or whatever electronics are controlling it) seems to holler down to the galley for a response—especially when in fourth or fifth and wanting a quick burst.

That's too bad, because the 2011 Fiesta has perhaps the best steering of any small car, with a nice, stable on-center feel plus a quick ratio and some road feel over mixed surfaces. It ranks right up there with the Mazda3 and MINI Cooper.

Ride quality is a little bouncy and busy on the highway, but on city and suburban drives it was great at soaking up major bumps while feeling crisp and tossable.

The Fiesta isn't bad for road or wind noise either, but it's boomy in a way that reminds us of those as long as you're accelerating, even ever-so-slightly, you hear the engine. It's a little coarse. And, on our test car, there seemed to be some untamed vibrations, as the gas pedal tickled my foot at certain resonant frequencies.

Seats are however another indicator that you're in a small, inexpensive car; they're nicely upholstered and trimmed, but very short and missing much support—especially real lateral support for corners.

Over the course of a week with the Fiesta, covering just over a hundred miles, and a mix of stop-and-go and a couple of short Interstate runs out to shopping in the suburbs, we averaged 32 mpg. Like a number of newer cars with high mileage claims, you can eke 40+ out of the Fiesta, but the conditions have to be right; when we set the cruise to about 65 mph for a number of miles, on mostly level ground, we averaged 44 mpg.

Out top-of-the-range Fiesta SES test car totaled at $19,840 and came with what's called the Rapid Spec 301A Package, which includes heated front seats, chrome beltline and decklid trim, keyless entry and start, and a perimeter alarm; it also has the Red Candy Metallic paint (a $180 option). Sync, for voice-operation of hands-free calling functions, remains Ford's trump card in this class; it's offered across the lineup. However, it naturally begs the question, is the Fiesta worth about double the price of a base 2011 Nissan Versa 1.6 sedan or a base 2011 Hyundai Accent three-door?

While the 2011 Ford Fiesta is disappointing in some respects—namely for engine noise, the balky DCT, and for being no small wonder for space—it never let us down in looking and feeling fresh and exciting. For many small-car shoppers, that might be enough to warrant a little extra.