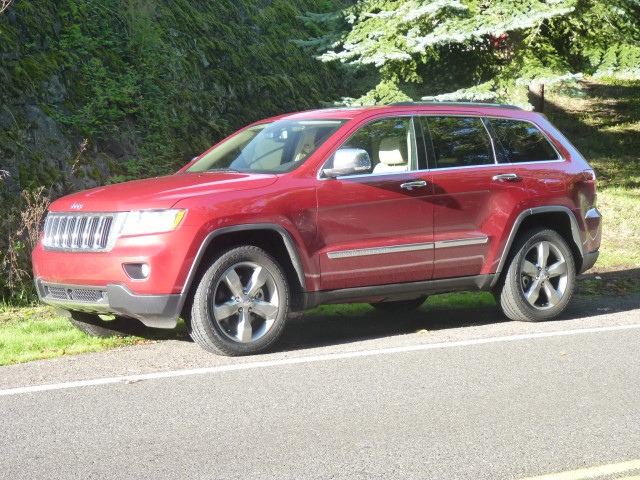 The Grand Cherokee's popularity with families was always a little puzzling. Decidedly old-tech in some respects, and clumsy-feeling on a curvy road, the old Grand was in many trims very compromised on the road in favor of the rare off-roading it might someday see. In recent years, Chrysler seemed to sidestep modernizing the Grand Cherokee in some respects, with the interior remaining too snug, and the ride and handling particularly unimpressive.

So that goes to say, I didn't expect a lot in taking the new 2011 Grand Cherokee out over Oregon's Coast Range and back, on narrow, winding forest roads, with damp and dry surfaces, rough patches, and logging trucks. Even though the jury's already out that the 2011 Grand Cherokee is much-improved, it couldn't be that much better, I thought.

Hefty, but under control

Well, I dramatically underestimated the new Grand. The main reason: It has very impressive body control. When you accelerate hard, the front end doesn't lift; the steering doesn't get light; instead, the Grand Cherokee just hunkers down, staying uber-composed, with the Hemi V-8 roaring up near redline and the automatic pulling off quick yet isolated shifts that have a certain...um...Mercedes-like quality (it's basically an M-B tranny). Overall, there's definitely a feeling you're hauling around a lot of weight, just doing it with poise.

Give the steering wheel a quick input and there's no longer the disconcerting moment of sidewall flex followed directly by suspension softness and secondary wallow; in the new Grand Cherokee the body feels well controlled, its center of mass feels lower than you'd guess it to be. The steering has a nice weighting (though numb feel), the body stays composed, and the Quadra-Trac II system has the finesse needed for sharp corners on a wet road. The suspension, overall, loads and unloads with a progressive, predictable feel that's unusual in a rugged utility vehicle.

The seating position in the 2011 Grand Cherokee is still high, as we're accustomed to, but there's lots of headroom and the driving position is much better. And the instrument panel is simple in layout, impressive in the details, with nice materials throughout the cabin and tight, rattle-free construction. In back, it's good news, too; the seating is at a natural height, with plenty of headroom and generous cushions. One minor letdown: the Grand Cherokee's cargo floor remains awfully high compared to car-based crossovers, leaving a bit less cargo space than you might expect if you go from, say, a Ford Flex.

Our Grand Cherokee came equipped with Chrysler's 5.7-liter V-8, making 360 horsepower, and the five-speed automatic transmission that's included across the entire line. Yes, it's the Hemi engine, but for some reason it's not called that in the Jeep. In any case, there's lots to love about this engine; it starts with a characteristic low rumble and whoosh and keeps up with fast-moving traffic seemingly without even breaking a sweat. With a 7,400-pound tow rating (rear-wheel drive version), it's a natural for towing.

The base 3.6-liter Pentastar V-6, by the way, is impressive as well, and some of High Gear Media's editors prefer it.

You might not actually see much better mileage with the V-6 though; we averaged nearly 19 mpg over 230 miles of driving—split about equally between Interstates, two-lane back roads, and congested city streets. That's an impressive figure—as good if not better than we'd see in some V-6 crossovers, and likely because the V-8 is geared tall and thrums along below 2,000 rpm most of the time. The V-8's MDS system, which deactivates some of the cylinders when cruising or coasting, surely has a role, too.

Oh, and we even got some brief time off-roading in the Grand. With the Jeep's new Land Rover-like SelecTerrain system, the Grand Cherokee's combination of mechanical and electronic strategies, plus its surprisingly versatile suspension, has the makings of a solid off-roader, too.

With the 2011 Grand Cherokee, Jeep at last has a very nice driving, well-rounded vehicle that does it all and doesn't have any glaring deficiencies 95 percent of the time. Driving on-road is now very grand as well.

For more information see our full review on the 2011 Jeep Grand Cherokee, where you'll also find more on features, pricing, and specs, plus what other review sources think.