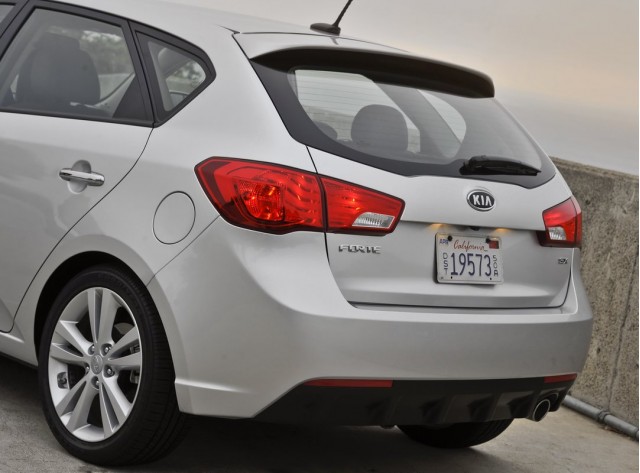 Kia made one very large leap near the front of the crowded small-car class with its Forte family—introduced last year first as a sedan, then as an especially stylish Forte Koup two-door.

Now, for 2011, the Forte is back with a couple of very significant changes. The first is a third, all-new body style: the Forte 5-Door. With swept-back, hatchback design that takes after the likes of the Mazda3, the Forte 5-Door offers the same basic seating package as the sedan, but with a little more versatility for cargo. It's considered a premium model, priced significantly higher than the Forte sedan and, like the Forte Koup, is only offered in mid-level EX and sporty SX trims.

The second major change for 2011 is that the Forte gets some very significant powertrain upgrades. The five-speed manual gearbox is history, replaced by a six-speed, and a new six-speed automatic transmission replaces both the four- and five-speed automatics from last year. Mid-level EX and sporty Forte SX models now come with the six-speed automatic standard, while it's optional on the base LX. Kia says that the new automatic is a Kia Motors exclusive—so not shared with Hyundai and apparently different from the six-speed in the new 2011 Hyundai Elantra.

The optional Fuel Economy Package that's available on the EX now also includes the new six-speed automatic, in addition to electric power steering, a smart alternator, and low-rolling resistance tires—plus some aerodynamic improvements. The result is impressive, bringing EPA ratings up to 27 mpg city, 37 highway (1 mpg better on the highway than with this package on the 2010, with the five-speed).

In The Car Connection's full review on the 2011 Kia Forte—drawing from several driving experiences with the 2010 model—we point to the Forte's roomy interior, quiet cabin, elegant, simple look, and standard safety and connectivity features as reasons why you should consider it. Downsides include steering feel, and balky clutch coordination with the manual gearbox. There also remains no integrated, screen-based nav system available on the Forte—but in this age of inexpensive aftermarket units, we don't see that as much of a drawback.

Check out the review, along with updated photo galleries and specs on each variant, and we'll be updating you as soon as we drive the Forte 5-Door and experience the new six-speed automatic.