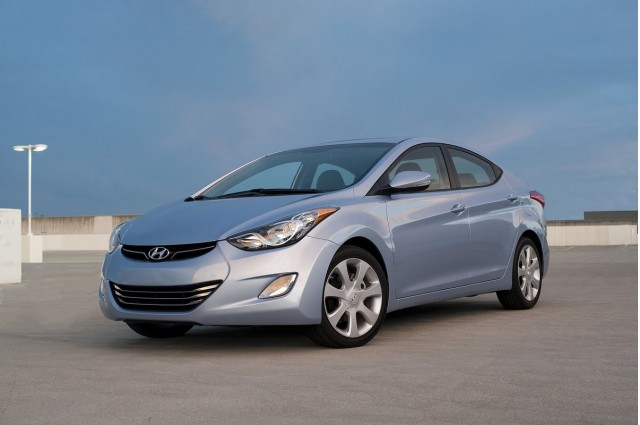 By the looks of it, Hyundai has rolled out yet another overachiever in its 2011 Hyundai Elantra.

That's certainly not a bad thing in a class that's been stagnating in recent years; automakers figured out that people want the basics in compact sedans, like air conditioning, cruise control, and the like, but above that, they were pretty much just pulling their punches. Anonymous exteriors, boomy interiors, and skimpy feature sets prevailed, along with fuel economy ratings that really aren't much better than those of mid-size cars.

And then with the last generation of the Elantra, something interesting happened: by nearly all accounts, the Elantra emerged ahead of the Corolla in most respects. And this year, residual value experts ALG have even rated the Elantra at the top of its class, above the Corolla and Civic—confirming that, five years down the line, they think the Elantra will be worth the most.

The new 'Fluidic Sculpture' exterior has the same curvy sheetmetal and prominent rising beltline crease as the 2011 Hyundai Sonata sedan, as well as the very swept-back headlights, yet thanks to a little more sharpness and angularity at the front—in the air dam and fog lamps, especially—the design just has a crisper look. Big 17-inch wheels (only on upper trims, we suspect) and flared fenders also help give the design a little more pop. And the sleekness of the whole design isn't just a trick for the eyes; Hyundai says that the coefficient of drag is a very low 0.28—even slightly lower than that of the Chevy Volt.

The Elantra's interior bears a likeness to the Sonata's cabin, though with slightly more sci-fi look. It looks like it might combine some of the best of cockpit-style layouts with more open ones, as it pinches quite narrow up at the top for more knee room. The nav and sound system controls are up high, along with the nav screen, while climate controls are just below. Nice, round analog gauges sit directly ahead of the driver, as well as a set of steering-wheel controls. Instrument panels have a two-tone look, with hazy metallic trim.

Standard on the Elantra is a new 1.8-liter 'Nu' four-cylinder engine, with variable valve timing, making 148 horsepower and 131 pound-feet of torque; that's pretty much par within this class, but fuel economy is much better than average, at 29 mpg city, 40 highway for both automatic and manual-transmission models. The 2011 Chevrolet Cruze Eco gets an EPA rating of 28 mpg city, 42 highway, but other Cruze models get 22/35 or 24/36. A new six-speed manual gearbox is standard, while a new lighter-weight six-speed automatic is available—and we should note because it means more with small engines, has one more gear than the Honda Civic and two more than the Toyota Corolla.

With a 106.3-inch wheelbase and 178.3-inch overall length, the 2011 Elantra approaches mid-size in exterior dimensions. The new Elantra is big inside, too; at 95.6 cubic feet of passenger volume, its cabin is large enough to be officially mid-size—slightly larger than that of the 2011 Chevrolet Cruze, and significantly larger than Civic or Corolla. Just as in the Sonata, it appears from initial pictures that seats are more generously padded and bolstered; and while the Elantra has been made lower, headroom has been maintained. Hyundai notes that it even beats the Acura TSX, Nissan Maxima, and VW Passat CC when looking at total interior volume (cabin plus trunk). And the Elantra's cargo space itself is larger than all other cars in this class except for the Cruze.

Hyundai has left no safety equipment on the table with the 2011 Elantra. It's all included: stability control and anti-lock brakes with Brake Assist, as is a new Steering Effort Assist system that helps steer you back toward stability and control in a skid. Front seat-mounted side airbags are also standard, as are front and rear side-curtain bags.

Although Hyundai hasn't released a full feature set yet, a 172-watt, six-speaker sound system with iPod/USB and aux-in, along with satellite radio, is standard, while options include a 360-watt system. Touch-screen navigation is available even on the base Elantra GLS, and the nav system incorporates real-time traffic and the suite of XM Data services. A sunroof, leather upholstery, and push-button start are on the options list. The new Elantra will also offer a segment first: heated rear seats. It's the sort of feature set that we'd normally have to step up to a luxury brand to get.